One more worry for banks: Wal-Mart 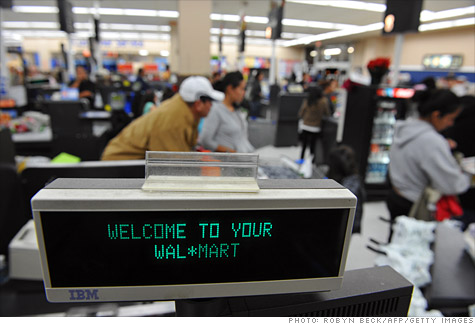 While the banking sector has been in turmoil, Wal-Mart has aggressively courted customers' pocketbooks, partnering with financial services companies to offer money transfers, check cashing and bill payments, and putting virtual checking accounts -- refillable pre-paid debit cards -- in the hands of more than two million customers.

The company downplays its desire to garner a banking license, but recent changes in the banking and regulatory landscape have only increased the eventual likelihood of a Wal-Mart Bank. The latest evidence that Wal-Mart plans to continue its push into financial services was the news last week that it had taken an equity stake in Green Dot, which manages the retailer's prepaid debit cards and is currently seeking regulatory approval to acquire a small Utah-based bank for $15.7 million.

Wal-Mart has attempted to acquire its own banking license several times since 1999. In 2007 it dropped plans to acquire an industrial-bank charter in Utah after heavy lobbying by the banking industry. Banks argued that Wal-Mart might steer lending toward favorable suppliers and away from competitors. Had Wal-Mart succeeded, its Utah "industrial loan corporation" could have handled all of its card processing and allowed the retail giant to take deposits and make loans.

While it must now partner with companies like Green Dot and SunTrust (STI, Fortune 500) to provide such services in the United States, this shaving of the profit margin hasn't slowed Wal-Mart (WMT, Fortune 500) down. Last week Wal-Mart opened its 1,000th "Money Center" and announced that it planned to expand to 500 more stores. It also trumpeted the launching of a Wal-Mart credit card in Canada, where it received a banking license just last month. In Mexico, where it has operated a bank since 2007, Wal-Mart has plans to open up to 150 new branches and take deposits in the checkout line. Back in the U.S., through a partnership with SunTrust, Wal-Mart has nearly doubled the number of bank branches in its stores over the last five years to a total of 83.

"Wal-Mart's income from the provision of financial services is currently an insignificant part of their overall income," says Rajesh Narayanan, finance professor at Louisiana State University. "But the rapidity which they have expanded their services in this arena suggest that their eyes are on a larger prize."

For Wal-Mart, the benefits of offering financial services are clear. In addition to the $3 or so that customers pay for things like applying for and refilling debit cards, and having checks processed or printed, Wal-Mart steers shoppers toward making purchases in its stores through cash-back incentives. It also benefits from offering what amounts to a mall of services within its own stores, which offers everything from groceries and retail goods to fast food restaurants, drugstores, eyeglass centers, portrait studios, gas stations and salons.

A captive consumer becomes particularly important when sales are slow, as they have been for Wal-Mart, whose CFO, Tom Schoewe, recently complained that Wal-Mart customers were increasingly using food stamps and "living paycheck to paycheck." Wal-Mart needs these customers to keep spending. It's helping out by giving them an easy and -- compared to usury fees at many check-cashing locations -- cheap way to handle their money. (See also Why Wal-Mart's sales should have everyone worried.)

The market for Wal-Mart's debit card is large, with the company's literature noting that 28 million people in the United States don't have a bank account and that 45 million more are relying on check-cashing centers, pay-day loan providers and money-wire services for their banking needs. Wal-Mart, which has rolled out the catchy slogan of "saving people money so they can live better," figures its services tap into a market that equals at least 25% of the U.S. population.

The idea is to take Sam Walton's ethos of lowering "the cost of living for everyone" and apply it to financial services as well. Just in the debit card department, Wal-Mart estimates it can take in its still-generous fees while reducing what the average check-cashing customer pays by 25% to 50%. Although Wal-Mart does not break out the fee revenue it makes on its money services, last year the company estimated that customers would register $2 billion in deposits on the cards and save approximately $450 million in fees.

While Wal-Mart has focused on the low income market, the concern among payment processors like Visa (V, Fortune 500) and Mastercard (MA, Fortune 500) and among community banks is that Wal-Mart will keep inching up the food chain and possibly end up with that banking charter it has been eyeing for more than a decade. As Jane Thompson, Wal-Mart's president of financial services told The New York Times back in 2007, Wal-Mart's debit cards and other payment services are "foundational products," from which Wal-Mart could expand "up the credit ladder of financial services." Wal-Mart did not respond to a request for comment for this story.

Certain aspects of the financial regulation currently being debated by lawmakers could continue to impede Wal-Mart's bank charter gambit. But on measure, Professor D. Anthony Plath, who teaches finance at the University of North Carolina at Charlotte, says Wal-Mart has never been in a better position to force the issue. Regulators have already curtailed overdraft fees and cracked down on the way credit-card companies punish customers who miss or delay payments. Lawmakers are now showing a strong interest in capping fees on debit transactions.

Meanwhile, consumers are being hit with new fees -- and the end of free checking -- at many banks trying to shore up this ever-important source of revenue. A new well-funded competitor like Wal-Mart would make this fee shift more difficult and drive down fees across the board.

"If there has ever been a time when you can make an argument for increased competition, now is the time," says Plath, who notes that Wal-Mart has already met all regulatory demands, has the necessary capital, has a balance sheet that is stronger than many commercial banks and serves an ignored market. He projects that Wal-Mart will obtain a banking license within the next few years, calling it "pretty much a fait accompli," and that the company will then bring to market a series of "lifeline services," such as simple savings and deposit accounts carrying very low costs, and loans to consumers shut out by their community banks.

"Wal-Mart is going to accelerate the evolution of the banking industry," he says. "They would be a different kind of bank, but the kind of bank the industry may need right now."

Update: In response to this article, Jane Thompson, president of financial and consumer services at Wal-Mart, said the company has no plans to enter the banking industry in the U.S.