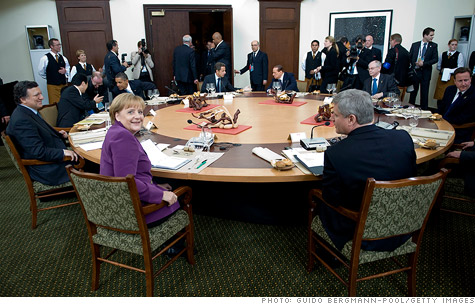 NEW YORK (CNNMoney.com) -- Spending is becoming a dirty word in Congress and in Europe because of concerns over unsustainable growth in debt.

But those who are now laser-focused on not adding to government debt may be too short-sighted, some say.

Case in point: The Senate this week failed for the third time to extend unemployment benefits for the long-time jobless and to offer more money to states to help them meet their Medicaid obligations.

"If we end up provoking another Great Depression, it will end up costing us way more. This is a very scary economic event," said Syracuse University professor and budget expert Len Burman.

Burman is convinced the United States faces catastrophic budget failure unless lawmakers adopt fiscally responsible policies and tame debt over time. But he is equally worried now that the country's fiscal condition will get that much worse if more isn't done to boost the economy in the short run both in the United States and Europe.

In his opinion, Congress should do whatever it takes to support states and to provide extensions for unemployment benefits.

"The idea of all the states and Europe contracting is [terrifying]," Burman said.

Economist Mark Zandi, who has advised both Democrats and Republicans, concurs. He thinks Congress should spend $25 billion to $50 billion to help the states, or risk up to 500,000 jobs being lost in the next 18 months at the state and local government levels.

If potential private-sector job loss is included, the liberal Center on Budget and Policy Priorities estimates that 900,000 jobs could be lost.

Holtz-Eakin said he favors extending unemployment benefits because it's the humane thing to do for Americans struggling to find work. But he opposes more aid to the states because he doesn't believe it will stimulate the economy or solve states' budget problems.

"Previous rounds of state aid led them to expect they would get more when there was no promise of more," he said. "In the long run state budgets don't line up. And you're never going to get the states going until the [national] economy gets going."

He believes that business-friendly federal policies -- not more government spending -- will jumpstart the economy.

He also thinks comparisons to 1937 -- when the United States went into a deep recession after the government began to pull in the fiscal reins in the face of growing concerns over deficits -- are overblown.

Indeed, Zandi said that he actually believes there's a better-than-even chance that the economy will not go back into recession, even if Congress doesn't offer any additional help to states and to the unemployed.

"That's a reasonable forecast," Zandi said. "But the risks are too high to take that chance with a 10% unemployment rate, a 0% federal funds rate and a $1.4 trillion annual deficit," he said.

One thing all deficit hawks do agree on is that economic growth can help reduce U.S. debt levels. But even double-digit growth for decades won't be enough to cure what ails the budget.

There are two parts to the country's deficits. One is short term -- incurred because of drops in revenue due to the recession and increased spending to combat the downturn. Short-term deficits can be greatly helped by economic growth, because growth generates more tax receipts and thus reduces the need to borrow.

But the other part is the country's structural deficit, much of which is the projected spending on Medicare and Social Security. The structural deficit will continue to increase long after the economy recovers.

Many deficit hawks -- including one of the staunchest, former U.S. comptroller general David Walker -- believe that now may be too soon for serious debt reduction. But they also say now is exactly the time to plan for that reduction when the economy strengthens.

That's the job of President Obama's bipartisan fiscal commission, which will meet for its third full meeting next week. Congressional Budget Director Douglas Elmendorf will address the panel to present the agency's long-term budget outlook. Here's a sure bet: the word "unsustainable" will come up ... a lot.

Raising the retirement age a contentious debate all over