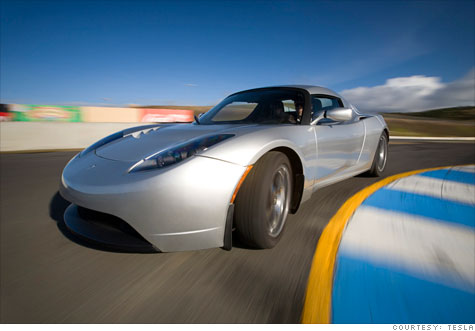 Tesla has sold just more than 1,000 Roadsters, but the new Model S sedan (below) has investors excited about the company's future prospects. By David Goldman, staff writerJune 29, 2010: 4:19 PM ET

NEW YORK (CNNMoney.com) -- Investors snapped up shares of Tesla Motors public debut on Tuesday, which raised $266 million for the glitzy but not yet profitable electric car maker.

Tesla, which began trading on Nasdaq under the symbol "TSLA (TSLA)," priced its shares late Monday at $17 each, above the target range of $14 to $16. When the shares hit the open market, the stock shot higher: Tesla's first trade on Nasdaq was for $19 a share.

It was the first IPO by an American automaker since Ford Motor Co.'s debut in 1956.

The offering tested investors' faith in a company that has proven it can make functional and stunning electric cars but has never had a profitable quarter.

But investors were giddy about the Palo Alto, Calif.-based automaker's initial public offering, prompting Tesla on Monday to increase the number of shares it offered by nearly a fifth to 13.3 million.

Much of the excitement is pegged to Tesla's launch of the Model S, an electric sedan that the company says will sell for a minimum of $50,000 in 2013. That's much more reasonable and practical for most consumers than the vehicle that Tesla currently sells, the $100,000 Roadster sports car.

The electric automaker plans to acquire a plant where it will produce 20,000 new Model S sedans each year starting in 2013. That's a significant increase from the 1,063 Roadsters it has sold -- total. But until the Model S goes on sale, which will begin in 2012, Tesla said it will continue to pile up hefty losses.