BP could be ripe for takeover 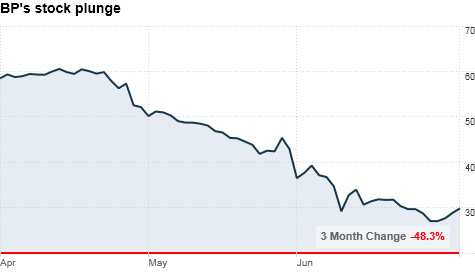 NEW YORK (CNNMoney.com) -- BP's stock price has fallen far enough for the oil company to become an attractive takeover target for its biggest rivals, according to industry analysts.

Fred Lucas of JPMorgan believes that investors have overdone it, making the stock an attractive value for buyers -- including other companies.

"In theory, either Exxon Mobil or RD Shell could consider a bid for BP," wrote Lucas in a note to investors. "We focus on these two names because they have similar business models and similar global asset structures. They also bear the lowest political risk to a potential combination with BP."

Lucas said that his idea of a proposed takeover of BP was "prompted by the gap between the current market value of BP and the intrinsic value that we see in BP."

Another oil industry analyst, Douglas Youngson of Arbuthnot Securities, told CNNMoney last month that if BP's stock dropped below $30 a share, it would become an attractive takeover target.

"If the share price continues to fall, other companies may see this for the bargain it will be," said Youngson on June 2, when BP's stock closed at $37.66.

Of the various big players in the oil industry -- including Gazprom and PetroChina (PTR) -- Lucas believes that ExxonMobil (XOM, Fortune 500) is in the best position to be the acquirer.

He wrote that Exxon Mobil "has the largest rating advantage and strongest balance sheet," providing it with enough cash to handle the deal.

"Exxon Mobil has also proven its ability to integrate a very large transaction successfully -- its merger with Mobil was a resounding success," added Lucas. "RD Shell has no large-scale merger integration experience."

Gazprom wouldn't be a contender because of a "low stock market rating," he said, while PetroChina "would encounter major political barriers given its controlling shareholder - the Chinese government."

BP has been purging itself of cash to try and fix the environmental and economic aftermath of the disaster.

The company said it has paid out $2.65 billion for the clean-up, and another $130 million on 41,000 claims from workers and business owners who lost their livelihoods in the wake of the spill. More than 80,000 claims have been submitted so far. Bowing to pressure from the U.S. government, BP has put $20 billion in escrow to cover damages.

Lucas figures that the leak will stop sometime in July, meaning a finite cap to the liabilities. So this might be a good time for Exxon Mobil to swoop in, especially since the oil giant has had its own experiences with catastrophic oil spills.

Before BP's environmental disaster in the Gulf, Exxon had the dubious distinction of causing the nation's worst oil spill, when the Exxon Valdez oil tanker ran aground off the coast of Alaska in 1989.

Spokesmen for BP and RD Shell declined to comment on this story. Exxon Mobil did not respond to messages from CNNMoney.com.