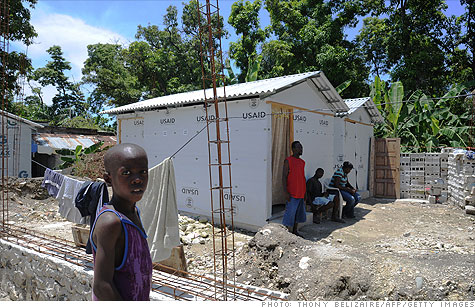 NEW YORK (CNNMoney.com) -- U.S. relief organizations have raised $1.3 billion in donations over the six months since an earthquake devastated Haiti, according to a philanthropy expert.

While much of the money is yet to be spent, even more will be needed to rebuild the battered nation.

The donations have been enough to provide basic necessities such as food and water, according to Stacy Palmer, editor of the Chronicle of Philanthropy. But now homeless Haitians also need help fending off tropical storms.

"That's potentially worrisome with the hurricane season about to begin," she said. "The kind of shelters that people are in right now are tarps and things that would not necessarily be able to withstand a hurricane. The goal is to get sturdier kind of housing."

Palmer said that $1.3 billion is an impressive tally, coming close to the $1.6 billion that was raised in the wake of the 2004 tsunami in the South Pacific.

Many of the donations came through the American Red Cross, which has raised $468 million for the Haiti relief fund. The organization said it has so far spent $148.5 million -- about a third of the money. About three-quarters has been spent on food, emergency services and shelter, the Red Cross said. It expects to spend over $200 million by the earthquake's first anniversary.

On Jan. 12, a 7.0 magnitude earthquake killed more than 200,000 people and devastated the capital city of Port-au-Prince. The disaster severely impacted three million Haitians, injuring many and destroying their homes and livelihoods.

Making matters worse is the fact that Haiti was desperately poor and crime-ridden even before the hurricane struck. As a result, humanitarian organizations are using some of the donated funds to help rebuild the shattered nation.

Food first, then the future

At the time of the disaster, Jean said the most pressing need was burying hundreds of thousands of bodies and evacuating survivors from the ruins of Port-au-Prince. So far, Yele said it has provided 84,000 hot meals, more than 14,000 "items" of canned and packaged food, nearly 33,000 bottles of water, nearly 2,500 diapers, and many thousands of other items for day-to-day survival.

Now, Jean is also focusing his attention on a problem that has plagued Haiti since long before the earthquake: crime. He's hoping to raise funds to establish security to cut down on "rampant" violence against earthquake victims, including kidnapping and rape.

In addition to the $1.3 billion in donations made to Haiti by individuals, international governments have pledged another $12 billion to rebuild the nation, according to Daniel Borochoff, president of the American Institute of Philanthropy. He said that Haiti will need every bit of that $13 billion or so dollars just to get back to where it was before the earthquake struck.

"Everybody knows that Haiti was an incredibly poor country before the crisis," said Borochoff. "Do we want to help them get to where they were before the earthquake, or do we want to elevate their standard of living?"

The task of rebuilding the country will be far more expensive than simply relieving the suffering there in the short term.

Making matters more difficult is the fact that donations have slowed significantly as the Haiti headlines have faded from the news, according to the Chronicle of Philanthropy's Stacy Palmer. She hopes to reverse that trend.

"All these stories about the six-month anniversary will hopefully get people to donate again, but people are preoccupied with the Gulf oil spill," she said.