For small businesses, loans are plentiful as long as they're plastic-backed 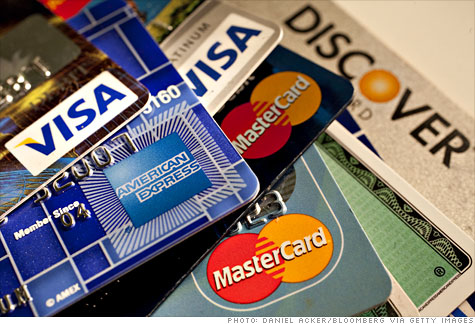 FORTUNE -- On Monday Federal Reserve Chairman Ben Bernanke took up the growing issue of lack of lending to small businesses by banks, and the havoc it's causing in the economy. Lending to small businesses contracted by $40 billion for the first quarter of 2010 as compared to 2008. Only a third to half of small businesses were able to secure a loan or line of credit in 2009. And Small Business Administration lending all but disappeared in June, thanks to the end of a popular stimulus program. Because of the dry-up, Bernanke said small businesses "have had difficulty obtaining the credit that they need to expand and, in some cases, even to continue operating."

But while banks have closed the window for small business loans, they've happily opened the back door to any business that wants that money in the form of a credit card loan. According to a Fed report, that business is booming. For small business credit cards -- whose terms are generally worse than regular bank loans -- 75% of all applicants were approved, in some cases probably by the very same banks that denied their loan applications.

But long-term thinking isn't possible with credit card financing. The most common SBA loan carries a minimum term of seven years. Credit card lines, as many consumers and small businesses discovered during the financial crisis, can be yanked overnight.

That banks and our government are set up to push the latter over the former speaks volumes about the state of our economy and its path to recovery.

Banks are pointing to two reasons for the drop in real loans: lack of collateral and a renewed sense of risk aversion. For lack of collateral, business owners who were once able to borrow against assets -- mostly their land or building, but also equipment -- have seen their property values plunge along with everyone else. As far as risk goes, Bernanke says banks have complained that regulators are getting in the way of their making good loans. And increased capital reserve requirements have affected banks' abilities and rationale for where they deploy their capital.

For business owners though, those problems are academic. When they need to get together money to keep going, and the loan isn't there, there aren't many options that don't involve plastic.

Although it's mostly small and medium sized banks that make small business loans, it's behemoths like Bank of America (BAC, Fortune 500) and J.P. Morgan Chase (JPM, Fortune 500) who issue the most credit cards.

Small business owners, who employ half of America's working population, have long realized that the big banks are generally ill-equipped or disinterested in reviewing business plans for their café, fabrication shop, or Web design firm, and then figuring out how to price a loan that would allow owners to smooth out their income, make payroll, and buy that new computer, while having a predictable monthly payment.

Instead of having ready cash, businesses are being turned away by small and medium banks and pushed into the arms of the behemoths. And the big banks -- who have every economic incentive to do this kind of pushing -- are in turn pushing business owners into fee-generating credit cards and credit card debt. Moreover, big banks aren't content with a financial system that already encourages this -- they're now actively making the case that all of this is a good thing.

In a new study commissioned by the American Bankers Association, it's claimed that credit card usage by small business owners helped create 1.6 million jobs throughout the economy over the past several years. Small business credit cards, by the way, are completely exempt from even the modest protections that the CARD Act, passed last year, offers consumers in the form of APR changes and penalty fees.

Reading through the ABA study, it quickly becomes apparent that there's nothing special about credit cards that helped create those jobs. All the credit cards did was exactly what a safer product, like a small business loan, would have done: enable businesses to invest upfront in order to handle more customers, take more orders, place bigger orders themselves, and hire new employees.

No matter what happens with financial reform, or whether the Obama Administration finds the political muscle to reauthorize the Small Business Administration stimulus package, the essential fact of our country's dependence on credit is not likely to change anytime soon.

Getting the economic incentives right -- steering customers to the financial product that makes the most sense for them, not the one that makes the most short-term profit for the bank -- is essential if the economy is going to grow. Right now the system encourages loans, as credit cards, that are the easiest for the bank to dispose of, and the hardest for customers to escape from, rather than ones that will bring the customer rather than the banker the most benefit.