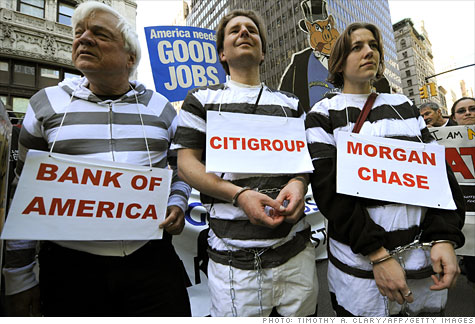 Workers and union members gather for a rally on Wall Street last April to protest lost jobs and the taxpayer-funded bailout of banks. By Becky Quick, contributorJuly 16, 2010: 4:51 AM ET

FORTUNE -- Beware the revisionists. It was bound to happen eventually, but here we are, less than two years after the U.S. faced its worst financial crisis in decades, and a steady stream of politicians routinely take to the airwaves to declare that the government overreacted with the $700 billion TARP plan and ripped off the taxpayer. That the incredible interventions by the Federal Reserve and the Treasury weren't necessary. That we should have taken our lumps and let the chips fall where they may.

Yeah, right. Jimmy Dunne, senior managing principal at investment-banking firm Sandler O'Neill, summed up my feelings perfectly when I asked him recently what he thought of those politicians: "They're idiots," he said. 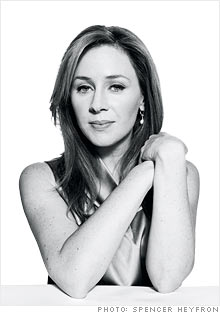 Dunne is one of many who watched the meltdown from a courtside seat. "You had to be at your desk every day, but there was just this feeling of hopelessness, like there was nothing you could do," he says of those dark days in the fall of 2008. "You just had this feeling in your stomach that if the government didn't stand up and say, 'We will be there,' the whole thing would be crumbling down."

Why would things crumble? Because our financial system is one that operates on the idea of faith. Faith that institutions will back their promises, that people will pay their bills. And this nation went through a period where everyone questioned that faith. Institution after institution came right up to the edge of collapse -- and some plunged off: Bear Stearns, IndyMac, Lehman Brothers, Fannie Mae, Freddie Mac, AIG (AIG, Fortune 500), Merrill Lynch, Washington Mutual (WAMUQ), Wachovia. The most frequently asked question on Wall Street back then was: Who's next? And in that environment, everything shuts down.

"It's like going to a party and being told 10 out of the 40 people there have a contagious disease," says Dunne. "You don't know which 10. Are you going to shake anybody's hand?"

That's why the government had to step in and take such extraordinary steps, from backing the credit markets to insuring money market investments to raising the FDIC's deposit insurance to $250,000 per bank account. Combined, those moves helped stop the run on the banks and kept the panic from spreading.

Those who think the financial system's collapse would have hurt only Wall Street fat cats are fools -- or terribly naive. When major companies can't get funding, they can't meet their payroll obligations. Some major companies including a few Dow components -- might have fallen into that camp back in the autumn of 2008 when the credit markets seized up, leaving hundreds of thousands of employees without a paycheck. It would have immediately trickled down to smaller companies across the country.

Unemployment, which is dogging our nation right now with an official rate just under 10%, could have easily risen to 25% and beyond, just like during the Great Depression. Plus, think of the disruption that would have played out if the banks had frozen up. During the height of the crisis, we were joined on the Squawk Box set by a guest host whose firm now manages over $1 trillion in assets. During one commercial break, he confessed that he had recently told his wife to go to the bank and take out as much money as possible, because he wasn't sure the ATMs would be working the next day. In fact, the smartest people I know, the ones with the most intimate knowledge of what was happening in the markets, all thought things were even more dire than government officials were letting on at that point.

The armchair-quarterback lawmakers and candidates who are now second-guessing these moves are dangerous. Not only are they playing on populist anger to advance their own needs (getting elected), but they also threaten to undermine those very necessary and positive steps that were taken by the government during our darkest hours. That, in turn, could prevent future leaders from doing the right thing the next time around. And though Congress was poised to pass a financial regulatory reform bill as Fortune went to press, you can bet that somewhere down the road, there will be a next time.

- Becky Quick is an anchor on CNBC's Squawk Box.

O Canada! Your banks are shaming us

Today's "Mancession" will change everything