John Paulson puts his legend to the test 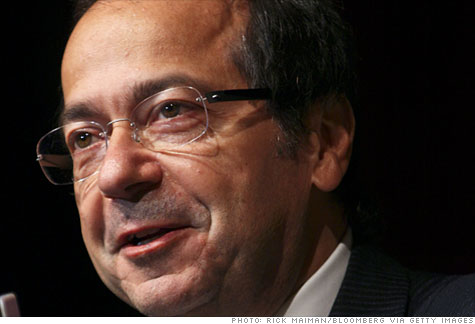 FORTUNE -- It's tough to be the king. John Paulson, current monarch of hedge funds, is having a challenging year, according to recent press reports. Bloomberg News recently reported that Paulson's $9 billion Advantage fund was down 5.8% in the first six months of the year. His Advantage Plus fund was down 8.8%. And while his Recovery fund was reportedly up through June, it suffered a 12.4% decline that month. The lone bright spot: his gold fund, up 13% for the year.

This from the man who for a string of years didn't know the meaning of a monthly decline. Arguably the biggest winner of all from the housing crash -- one of his funds returned 590% in 2007 -- Paulson made one of the ballsiest bets in the history of hedge funds and won. All that kerfuffle about Goldman Sachs (GS, Fortune 500) and the Abacus structure for which the bank settled with the SEC on Thursday? Recall, that was at the behest of Paulson, looking for patsies to take the other side of his bearish housing bets. And there was no shortage of them. His success: a literal explosion of assets under management from just $12.5 billion in 2007 to $36 billion as of November 2008. His payday in 2007 was a staggering $3.7 billion.

But it is the singular and precise nature of his housing bet that makes one wonder, is John Paulson about to morph from being the most celebrated hedge fund manager of his time to being the poster boy of that oft-repeated warning -- that past performance offers no indication of future results? It's hard to see how this is going to work out any other way.

Paulson, after all, made his bones as a contrarian. Is it even possible to be contrarian with more than $30 billion under management? He sure is trying. Apparently ignoring the fact that no one feels like they have any spare cash these days, Paulson's team has bet big on the highly leveraged casino industry. Yes, you heard that right. He's big into the equity of Harrah's, MGM (MGM, Fortune 500), and Boyd Gaming (BYD), three distressed investments if there ever were any.

"He was dead right being contrarian about subprime," says a rival hedge fund manager specializing in distressed assets. "But there are times when being a contrarian is wrong. I've covered gaming for a decade, and we have the opposite view of these guys. Of course, I'm sure they think they're big enough that they create their own intelligence. Good luck to him, though."

Gold and financials -- not the new subprime

And then there's the gold play. He's been right about it conceptually, of course. His $3 billion position in the SPDR gold trust has certainly paid off. What hasn't? His 12% stake in AngloGold Ashanti (AU), a position he bought in March of 2009 for $32 a share and which has underperformed a more straightforward bet on the physical commodity itself by 12%.

Never mind that the company had been trying to sell the stake for several years and had no takers. Suddenly Paulson was there, flush with cash, perhaps not realizing that a bullish bet on gold did not necessarily equal a bullish bet on a specific gold company. "That will be a fun one to get out of when he changes his mind," says another hedge fund manager.

"Look, most people have nice things to say about Paulson," says a competitor. "That said, this is the most obvious crowded trade out there. He is a smart guy with a history of doing well in merger arbitrage with a much smaller fund. He got the one big trade right, and now people seem to think he's an expert at all sorts of other stuff. This is classic return-chasing from people who want to show their own investors that they owned the winner."

In the lingo of Wall Street, John Paulson, who declined to comment for this story, is now so big that he is unable to "put on" or "take off" risk when he feels like it. The AngloGold stake, for example, is probably his to keep from this point onward, unless he's selling it at cut-rate prices.

Should he have retired with his $3.7 billion payday in 2007 and gone into history as one of the best ever? Or is he merely doing that which is economically rational and taking the huge management fees when they're there for the taking?

Whenever he's done, he's going to be a very rich man. But likely more of a mortal than he was in 2009.