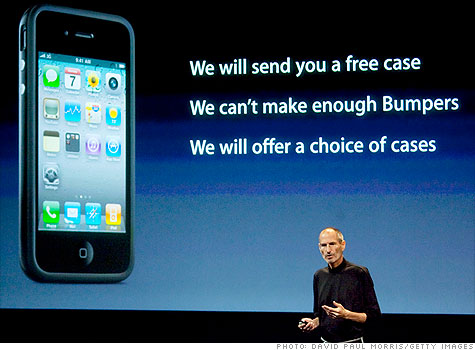 NEW YORK (CNNMoney.com) -- It's the best of times and the worst of times for iPhone 4 case makers.

As a remedy for its so-called "death grip" problem on the new device, Apple announced on Friday that it would send a free case to every iPhone 4 purchaser who wants one, at least until Sept. 30. Sounds like a pretty good deal for a company like Forward Industries (FORD), which manufacturers the Apple-branded "bumper" case for the new iPhone. Forward's stock shot up 22% right after Apple CEO Steve Jobs' announcement.

The freebie deal presents an opportunity for other case manufacturers as well: Jobs said his company can't make enough bumper cases to satisfy anticipated demand, so Apple will also allow customers to get a free third-party case instead. To do this, Apple will post a list of cases to choose from on its website beginning next week, and it will deliver them to customers free of charge.

"There's a tremendous upside for case manufacturers," said Francis Sideco, principal wireless analyst with supply chain analysis firm iSuppli. "Whatever Apple pays them for the cases, it's going to be what the manufacturers were going to get from Apple anyway. And the announcement gives them much higher penetration than they would have had before."

But Forward Industries' shares finished the day essentially flat, at $3.75 a share. Another big iPhone case maker, Zagg Inc. (ZAGG), closed down 5% after rising 5% on the announcement. Why the sudden drop back?

That's where the "worst of times" comes into play. Jobs mentioned Friday that just 20% of iPhone 4 users have picked up a bumper case so far, despite all of the hoopla about how the case solves the phone's dropped-signal issue. That's far fewer than the 80% of iPhone 3GS users who bought a case soon after the phone's release last year.

Jobs' said his theory about why fewer customers are buying cases is that people love the look and feel of the iPhone 4 so much they don't want to ruin it with a rubbery bumper.

Illustrating the point: During a Q&A session at Friday event, veteran Apple chronicler John Gruber asked Jobs if he uses a case. Jobs and two other Apple executives simultaneously whipped out their bare, bumper-free iPhones.

So even if many users will want a case, it's unlikely that every single iPhone customer would order one.

"The signal issue is a relatively sporadic problem," said Sideco, noting that Jobs said just 1.7% of customers have returned their iPhone 4s and 0.55% have registered complaints. "It wouldn't be 100% of people who get a case."

Sideco said he still expects the number of customers ordering cases to rise well above 20% after Apple's offer goes into effect next week. Many people who balked at the bumpers' $29 price tag will be happy to take a free case, even if they're on the fence about actually using it.

The offer could be an expensive proposition for Apple, though predicting how much the company will spend is like trying to hit a moving target.

ISuppli expects 8 million to 10 million iPhones will be sold between the iPhone 4's June 24 launch day and September 30. The cases that Apple will offer on its website will likely retail at $30, though analysts assume that Apple pays far, far less for each case than the retail price.

Shares of Apple (AAPL, Fortune 500) fell less than 1% to close the day after rising a bit more than 1% after its announcement.

The duct-tape fix: See it in action

Help Desk
Track testing tires to find the best
Find out how TireRack tests and reviews tires and why choosing the right ones for your car is so important. Play
Markets
Data as of 4:16pm ET
Data as of 2:44pm ET
Sponsored by
Sponsors
Sections