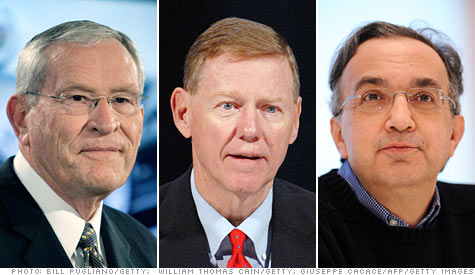 FORTUNE -- The news that General Motors is paying $3.5 billion for AmeriCredit, an auto finance company, is another signal that change is coming to Detroit -- and quickly.

While the old GM might have announced an acquisition of this size with ruffles and flourishes, the new team kept the announcement short and sweet. The deal will enable GM to do more leasing and make more subprime loans. Enough said.

For the first time in memory, all of the Detroit Three are run by industry outsiders, and they are making their presence felt in different ways.

Old habits are being reexamined. Instead of waiting for the Detroit auto show in January to roll out the new Explorer, Ford (F, Fortune 500) is unveiling it in selected cities, beginning Monday in New York. The idea is to bypass the traditional automotive press and appeal directly to local media outlets that are closer to the final customer.

Over at Chrysler, they don't believe in new model reveals at all, fearing that the appearance of the new car will erode sales of the old one. The 2011 Jeep Grand Cherokee was kept under tight wraps for months prior to its launch in June.

Chrysler has also stopped making calls to securities analysts and the media to report its monthly sales, saying the calls were a waste of everybody's time. Very seldom does the information conveyed go beyond what is contained in the news release.

GM has continued its calls but has warned analysts not to ask any more of the nitpicky questions they use to update their earnings models but are of little interest to the rest of the listeners.

And more substantively, all three companies are making a sincere effort to avoid over-production despite the low level of sales. They are keeping the brakes on incentives and dialing back low-margin sales to rental car fleets.

The traditional two-week summer shutdown, when assembly plants closed and blue- and white-collar workers alike headed for the lakeshore or the north woods seems to be losing traction as well. With payrolls sharply shrunken following the bankruptcies of GM and Chrysler, everybody is too busy to take the time.

That includes the three outsider CEOs.

GM's Ed Whitacre, a veteran of the telecommunications industry, is rushing the company toward an initial public offering before the end of the year. GM urgently needs to raise more capital so it can get the federal government off its back and make more targeted acquisitions like AmeriCredit.

As the successful IPO of electric carmaker Tesla demonstrates, there appears to be a market for auto stocks if properly packaged. GM wants to take advantage of the market as quickly as possible.

With business booming in China, GM's stock will certainly look appealing. But investors will also want to know how successful Whitacre has been at changing the company's culture of entitlement and privilege. The initial reports are that he is making progress, but the evidence is still preliminary.

At Ford meanwhile, CEO Alan Mulally, the former aerospace executive, has the job of finding a successor and then -- almost as important -- preparing the world for his retirement. As Mulally is more and more portrayed as Ford's miracle worker, investors could be in for a big letdown when he announces his departure.

What Mulally needs to do is to position his replacement as an inevitable choice and lay the groundwork months ahead of the time when he actually steps down.

Over at Chrysler, CEO Sergio Marchionne, an accountant and lawyer by training, is rebuilding the company with surprising speed. He has let it be known that Chrysler was profitable again in the second quarter despite its lack of new models and the dismal level of new car sales.

Now he hopes the momentum is enough to carry Chrysler into the fourth quarter, when the spigot on its product pipeline will be turned on, and its tired model lineup will get some refreshment.

You won't find these executives at the usual Detroit hangouts.

In the old days, everybody who counted could be found at the Townsend Hotel in Birmingham for breakfast and dinner. But the new three CEOs follow tighter schedules and have less time for socializing. Whitacre goes home to Texas for the weekend, Mulally's family is based in Seattle, and Marchionne spends two weeks a month in Italy running Fiat.

Perhaps that's the best thing about the new Detroit. The auto companies are being overseen by three guys whose vision goes beyond Grosse Pointe and Bloomfield Hills and are actually aware of what's happening in the rest of the world.

How Toyota lost its way

Jim Press heads to Nissan as a consultant