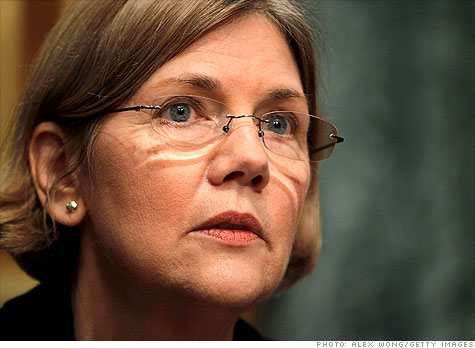 But conservatives and some bankers are trying to kill any chance that Warren - a consistent critic of the financial sector before it was cool to be one - will run the consumer financial protection agency that's part of the Wall Street reform measure just signed into law by President Obama.

Naysayers, such as Senate Minority Leader Mitch McConnell, R-Ky., say they just don't trust her - although he doesn't say why.

"I think there's a lot of controversy around Elizabeth Warren's services," McConnell said Tuesday in a media briefing. "It is an extraordinarily powerful position with an incredibly large budget and authority that is constrained by almost nothing. And, therefore, the person that does serve in that capacity is going to have to be trusted by everyone."

Warren, who chairs a congressionally appointed watchdog panel over the federal bailout, is not the only candidate for the job. But she is the one everyone is watching.

Her ideas for a regulator for financial products became the template for the new agency, which is tasked with regulating mortgages and credit cards, as well as making new rules for much of the financial industry and enforcing them at the largest banks.

Before the financial crisis, she was already the authority on mounting credit card debt. And her books about the financial decline of the middle class have been must-reads in the consumer advocacy community for years.

Warren's nomination would send a strong signal that the White House is willing to stand behind an aggressive regulator who will emphasize consumer needs over bank needs. White House spokesman Robert Gibbs called her "very confirmable" on Monday.

Warren declined to be interviewed, through a spokesman.

While several banking lobbying groups declined to talk about Warren for publication, several academics point to her prolific record warning against banking industry "tricks and traps" to explain why she shouldn't get the gig.

"Her first presumption is not that the markets work fine, but that the markets don't work and we need to intervene," said former Republican Senate Banking staffer Mark Calabria of the Cato Institute, a libertarian think tank. "She argues that borrowers are tricked and mislead, and the credit system is predatory."

Conservatives also say they know she will be an aggressive advocate, and that tougher rules under her reign could come at the expense of credit availability and jobs.

"Cracking down on Wall Street means that some people won't get a loan. There are jobs that won't be created. Cars that won't be sold," said Phillip Swagel, a visiting professor at Georgetown University, who was an assistant Treasury secretary during the George W. Bush administration. "Is she able to switch from advocacy to the thinking of the big picture of society?"

But consumer advocates and even some powerful lawmakers say a healthy distrust of the banking sector is what America needs right now after the last few decades, when regulators placed too much trust on banks.

"She's a tenured Harvard law professor and she has an understanding of how out of balance the responsibilities and obligations are right now between lenders and borrowers," said Tamara Draut, vice president of policy and programs for Demos, left-leaning think tank in New York.

Another fear among those at federal agencies is that Warren would use the consumer regulator job as a bully pulpit to push ideas that go farther than what makes administration officials comfortable.

Warren runs the Congressional Oversight Panel, a congressionally appointed watchdog group of five who are charged with oversight of the 2008 financial crisis bailout.

When Treasury Secretary Timothy Geithner testified before the oversight panel last spring, Warren's first question was why Treasury wasn't asking for the same kind of management shake-ups at big banks as they were in the auto industry.

"Do you think the banks are better managed than the auto companies?" she asked.

Generally, most lawmakers like Warren's tough questions and have praised her work - including Republicans such as Sen. Chuck Grassley, R-Iowa, and Sen. Olympia Snowe, R-Maine, who last year filed a failed amendment to attempt to get the panel subpoena power.

But on a few occasions her enthusiasm has irked fellow panel members, notably those who don't share her views. Of the five original panel members, only the three appointed by Democrats have stayed put. Three Republicans have stepped down.

And a top complaint penned by those who resigned is that the panel sometimes steps beyond its primary role as a watchdog, especially when it offered "controversial" policy alternatives they believe stretch the panel's defined mission.

"Good oversight may not always attract the same headlines as controversial policy proposals, but it is valuable; more important, this is the task assigned to the panel," wrote one of those who left, former Sen. John E. Sununu, last August. "The Panel is not, however, a policy-making body."

Rep. Jeb Hensarling, R-Texas, wrote in December that the main reason he was resigning was because the panel "too often focuses upon making policy recommendations to Congress in place of critical and badly needed oversight."

Sununu declined to be interviewed, and Hensarling didn't return calls in time for publication.

In response, Congressional Oversight Panel spokesman Peter Jackson said that six of the committee's last seven reports have been approved unanimously. He added that the panel is required, by law, to make policy recommendations.

The two Republicans currently serving on the oversight panel said in a statement that they've liked working with Warren. They found her "quite willing to modify her views if presented with well-reasoned cogent arguments," wrote J. Mark McWatters, a tax attorney, and Kenneth Troske, a University of Kentucky economics professor.