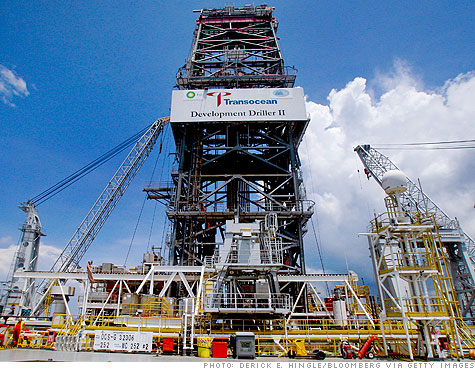 FORTUNE -- From the surface of the Gulf of Mexico, the end almost seems to be in sight.

We flew out to the scene of the Deepwater Horizon explosion on Saturday morning, on the last regularly scheduled BP-sponsored media excursion. A month ago, there was a waiting list for the weekly flights. Now there were empty seats on the 19-passenger Sikorsky S-92A helicopter -- a clear sign that, with the Macondo well finally capped, the media frenzy is also dying down.

Our flight left from the BP (BP) base in Houma, Louisiana, about an hour southwest of New Orleans, where many of the Deepwater Horizon workers -- most of them employed by rig-owner Transocean (RIG) -- were also ferried out to the Gulf. It was surprising how long it took after takeoff until the Mississippi River delta, criss-crossed with channels, bayous, and small bays, finally melted away to open sea. We passed dozens of floating rigs on the way out. Drilling moratorium notwithstanding, the Gulf remains busy with oil and gas operations.

But none of it resembled the scene when we arrived at the site of the spill. We counted more than 35 vessels in the area, an odd open-water gathering of rigs, production ships, and supply boats, suggestive of a vigil for a fallen comrade. Somewhere here beneath the surface -- about 1500 feet northwest of its original location, a mile deep and upside down -- lies the twisted, charred wreckage of the Deepwater Horizon.

It was a quiet Saturday aboard the Development Driller II, the giant rig on which we touched down around 11:45 a.m. Drilling operations there, on the second of two relief wells begun a few weeks after the disaster, have been suspended, with what appears to have been -- at long last -- the successful top-kill operation. The rig's sister ship, a half mile away, is scheduled to complete the first relief well later this month, by boring into the Macondo hole, 18,000 feet beneath the ocean surface, and plugging it permanently with cement.

That leaves the DDII -- whose own relief well was halted at 15,874 feet -- operating on standby, as an expensive floating insurance policy. The drilling floor -- the heart of this steel giant--was quiet on this Saturday, save for workers applying fresh coats of yellow safety paint. Not as hot as last week, we were told. There was a soft and steady breeze.

Among the workers we met on board was BP company man Vince Price, who completed a two-week hitch aboard the Deepwater Horizon on April 19, the day before the explosion. He was back home in Victoria, Texas, painting his boat, when a friend called with the news that the rig he'd just left was on fire, and that 11 of his colleagues were missing. "I was with them the last two weeks of their lives," he said. But no, he's not afraid. Like most offshore workers (and their spouses), he worries more about the helicopter ride, not to mention the drive to the airport.

A recent government analysis concluded that most of the estimated five million barrels of spilled oil is gone -- skimmed, burned, dispersed, consumed by microbes, or otherwise accounted for. Yet huge questions remain. What will be the long-term environmental impact of the oil and the chemical dispersants? When will the entire gulf -- slowly being reopened -- be safe to fish again? Will the moratorium on new drilling be lifted in time to prevent long-term redeployment of drilling rigs elsewhere? Not to mention: What really happened on the night of April 20 -- and who's to blame? (See also The BP spill is already gone and forgotten)

Some attempts to provide answers will be arriving soon. BP has announced plans to release an internal report into the accident in a few weeks. The joint investigation by the Coast Guard and the Bureau of Ocean Energy Management (formerly known as the MMS) will resume on August 23, with another round of testimony, this time in Houston; its final report is not expected until early 2011.

And when the well is finally sealed -- from above and below -- it will be possible to begin salvaging the critical equipment (notably the blowout preventer) that failed to prevent the spill and is now sitting on the sea floor. The crew of the DDII speculated that they might play some role in the recovery operation.

After about two hours touring the rig, the handful of media visitors was all rounded up. We'd be leaving a bit early on this Saturday. A small rainstorm was headed our way. No one was taking any chances.

The fisherman vs. BP

Who's to blame at BP? The board
Subscribe to Fortune