Political fights over clean coal get dirty and expensive

FORTUNE -- The politics of clean coal keep preventing the United States government from actually finishing a clean coal project. Last week, the Department of Energy added a new twist to the on-again-off-again clean coal project FutureGen, and it probably didn't have much to do with technology.

"Being the flagship DOE project tends to slow things down considerably because politics tend to get in the way," says John Thompson, the director of the Coal Transition Project at the Clean Air Task Force, a non-profit working on clean coal programs. 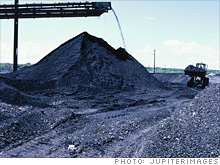 "The one thing that I think most observers would conclude about FutureGen is that it's been a highly political process from the beginning."

FutureGen started in 2003 under President George W. Bush. The original FutureGen was supposed to result in a 275 megawatt zero-emission coal plant in Mattoon, Illinois that converted emissions into hydrogen and electricity. Bush's DOE scrapped funding for this iteration of the project in 2008 because it got too expensive, coming in at $1.8 billion.

FutureGen picked up steam again in 2009 under President Obama. The plans remained largely the same: a plant in Mattoon, Illinois would use a technique called gasification to convert carbon emissions into a gas that can be stored or used for power.

But on August 5, the DOE announced another change. FutureGen is shifting locations to refit an existing 200 megawatt plant in Meredosia, Illinois, and will transport carbon to be stored in Mattoon via a 175-mile long pipeline. This version of the plan, called FutureGen 2.0, scraps the idea of a building a new plant in Mattoon, and will still cost at least $1.1 billion.

The DOE actually hasn't released a final estimate about how much the total project will cost, but it's going to receive about a billion of those dollars via Recovery Act, i.e., stimulus funding. The pipeline will be funded separately, and those usually cost about a million dollars per mile.

The revised project also calls for a different kind of technology, called oxy-combustion instead of gasification. During oxy-combustion, coal is burned with pure oxygen instead of air, which contains other elements and compounds. Burning coal with oxygen generates a form of carbon dioxide that's easier to capture.

The government should be investing in oxy-combustion, says Thomspon, just not this way for this project. "What is sort of surprising to me about the change is that they're putting so much money into a technology that has only been done at such a small scale," says Thompson.

According to government studies, oxy-combustion is cheaper. But Thompson says it's also the least-developed technology for capturing carbon emissions from coal, and there's no way of knowing the true cost for a large-scale project. Instead of scrapping the gasification plan already in process-which received a little over a billion dollars in DOE funding last year-the government should fund demonstrations of oxy-combustion technology at lower-output plants before scaling up to a project of this size.

"I feel sorry for the project at Meredosia because it's kind of got the FutureGen curse," says Thompson. That means it will probably wind up costing more than the government predicts, and stall. That's part of a larger image problem for the US government.

And, in the global clean energy community, these kinds of about-faces can quickly wear out other countries and investors seeking to emulate or partner with the United States on investments, technology and long term planning. "When the DOE makes these sudden switches, it undercuts it our credibility overseas," says Thompson.

The shift is especially embarrassing in relation to China. The Chinese government invested in the original plans for FutureGen, but pulled out when the project faltered. Now China is investing heavily in its own clean coal technology, and running laps around the US in terms of technological advances.

The Chinese are building more gasifiers than anyone, and they're building them cheaply. The United States still has a window of opportunity to work with China to develop these technologies together. But if political forces can't make good on the money needed to fund the current iteration of FutureGen, warts and all, the US may soon find itself sucking exhaust in the race for clean energy.