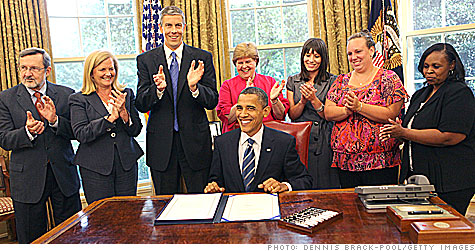 NEW YORK (CNNMoney.com) -- Cash-strapped states are getting $26 billion in federal funds to shore up their budgets.

The House voted 247-161 Tuesday, with support from the Democrats and overwhelming rejection from the Republicans, to send $16.1 billion in additional Medicaid money and $10 billion to prevent layoffs of teachers and first responders. In an unusual move, representatives returned from their August recess to approve the measure.

Here's how much each state could receive in federal assistance from the $26 billion Medicaid and education jobs bill. More

President Obama, who urged lawmakers to pass the bill, signed it later Tuesday.

Speaking from the Rose Garden earlier in the day, the president said the bill will "save hundreds of thousands of additional jobs in the coming year." He added that it will not add to the nation's deficit because it "is fully paid for, in part by closing tax loopholes that encourage corporations to ship American jobs overseas."

Speaker Nancy Pelosi, D-Ca., flanked by several teachers and PTA members during a press conference following the vote, called the measure "good news for children," as it saves over 300,000 jobs that are provide education and safer communities.

Additional assistance to the states has been kicked around in Congress for months to ease some of the fiscal crunch that has triggered massive layoffs in state and local governments.

Overall state government employment has dipped below its level at the start of the recession for the first time based on the Labor Department's July jobs report, the Rockefeller Institute of Government in New York said Tuesday.

State officials have been desperately lobbying their representatives, saying they need the money to balance their budgets. About 30 states had already included the additional Medicaid funds in their fiscal 2011 budgets, which began July 1, and would have to cut further if it doesn't come through.

Also, school districts were left in limbo weeks before the beginning of the school year while Congress debated whether to send them more aid. The bill is expected to save 290,000 jobs, including 140,000 teachers' positions, according to congressional Democrats.

Some Democrats, particularly in the House, did not like a provision that would remove a stimulus supplement from the federal food stamp program after April 2014. The measure, which would save $11.9 billion, would decrease the allocation given to a family of four by $59 a month, according to the Food Research and Action Center, an advocacy group.

The GOP, meanwhile, is not taking kindly to sending more aid to the states, saying the original $787 billion stimulus package was meant to do that. They also don't like the increased tax on multinational corporations.

"The American people are fed up with the Democrats' 'stimulus' spending and they certainly don't want another job-killing tax hike on U.S. job-creators," said House Republican Leader John Boehner, R-Ohio, in a statement Tuesday. "Everyone knows that state budgets have been hit hard and no one wants teachers or police officers to lose their jobs. But where do the bailouts end? Are we going to bail out states next year and the year after that too? At some point we've got to say 'enough is enough."