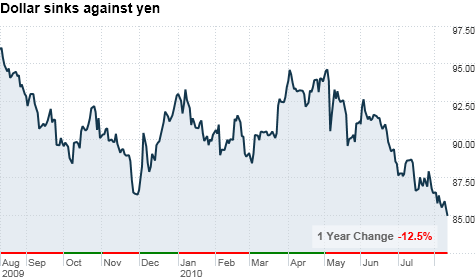 Click chart to see how other currencies are faring. By Annalyn Censky, staff reporterAugust 11, 2010: 4:20 PM ET

NEW YORK (CNNMoney.com) -- The dollar fell to a 15-year low against the Japanese yen Wednesday, as investors flocked to safe-haven trades after weak economic data was released by China and the Federal Reserve posted a bearish outlook.

What prices are doing: The greenback fell as much as 0.83% against the Japanese yen to ¥84.73 on Wednesday, before paring back some of those losses to trade around ¥85.37.

Both the dollar and yen are typically seen as low risk trades during times of economic uncertainty, so downbeat economic data can often boost their value against other foreign currencies.

But the yen's strength is also viewed as a worrisome sign for Japan, as it makes exporting products to the U.S. more expensive for Japanese companies, said Phil Streible, a senior market strategist with futures broker Lind-Waldock.

Japan's Nikkei stock index tanked 2.7% on the yen's strength Wednesday because the country depends on its export business to offset its weak domestic economy.

Following its two-day monetary policy meeting, the Bank of Japan decided on Tuesday to keep its benchmark interest rate unchanged at 0.1% as a means of supporting the country's recovery and tackling deflation. But Bank of Japan Governor Masaaki Shirakawa told reporters that "we are well aware that the yen's strength is a downside risk for corporate sentiment."

China needs to make a 'U-turn'

"It is no secret that China has become an engine of growth for many parts of the world but if the U.S. economy hits a rough patch, this engine could slow to a halt," Kathy Lien, director of currency research at Global Forex Trading said in a note to investors. "The combination of weaker U.S. and Chinese growth will hamper the global recovery in the fourth quarter."

That news, combined with the Federal Reserve's announcement on Tuesday that it will take measures to stimulate the U.S. economy, added steam to fears about a global economic slowdown.

"The pace of recovery in output and employment has slowed in recent months," the Fed said in its statement. The central bank still expects the economy to grow, bit it said the improvement will be "more modest in the near term than had been anticipated."

A downbeat outlook from the Bank of England on Wednesday also added fuel to the fire, sending U.S. stocks sinking in pre-market trading as investors instead opted for the safe-haven appeal of Treasurys, the yen and the dollar.

The dollar index -- which tracks the buck against several major rivals -- was up 1.4%.