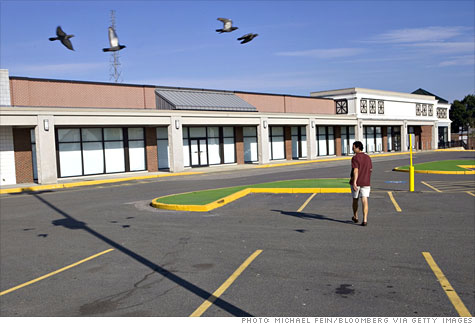 FORTUNE -- Consumers drive more than two-thirds of the nation's economy, and with growth hard to spot these days, it's easy to place the blame on stingy spenders. But that's a mistake.

Personal spending, in fact, has kept pace with the economy, accounting for a steady 70% of GDP before the recession, during the depths of the crisis, and into today's slow recovery. In fact, consumption relative to GDP rose slightly to 71% during the last two quarters of 2009 amid huge government spending programs -- such as the promotion of home and car sales -- to stimulate the economy. It has flattened out since.

But the market tends to get overly obsessed with consumer confidence whenever the government comes out with its latest growth figures. Business behavior is often directly influenced by how consumers say they feel about the economy. And it doesn't help growth much when consumer confidence falls to a five-month low, which the Conference Board reported at the end of July.

Consumption in America hasn't always been so high. Between the 1950s to the 1980s, it stayed relatively stable averaging about 63% of the total economy, says David Backus, economics professor at New York University. How it grew to its current levels are a bit of a mystery, but Backus points to a few factors, including growing wealth and government programs like social security that left consumers feeling good about the future (and took away a reason for them to save). The dawn of the credit card era played a major role as well.

But today, it's unreasonable to depend on consumers to accelerate the pace of economic recovery. They're debt-ridden and worried about their jobs. They're exhausted from too much spending in the years leading up to the financial crisis. They're choosing to pinch pennies instead -- and they don't consider their growing savings accounts to be a negative development.

If anything is going to pick up the pace of growth again, Backus says, it will likely have to come from investment by companies.

Unlike consumption, the investment part of the GDP equation has seen some of the steepest declines since the recession began. Spending by companies on everything from buildings to new equipment to software has risen steadily since 2009, but it's still below the ratios prior to the recession. During the latest quarter, investment made up 12.7% of GDP, compared with 15% during the same period in 2008.

It's not as if companies don't have the cash to invest. Cash balances of non-financial companies are markedly high at $837 billion at end of March, a 26% increase over the previous year's $665 billion, according to Standard & Poor's. Companies are holding cash equal to 10% of their value, much higher than the average 6.6% held since 1999.

Companies have significant debt on their balance sheets, too, but that's not primarily what's keeping executives from spending on investment or even hiring more workers, says Chris Christopher, economist with IHS Global Insight. He says it has more to do with overall uncertainty with the economy following a financial crisis that rattled companies into a kind of wait-and-see position.

GDP growth in the second quarter slowed to 2.4%, compared with 3.7% in the previous quarter. Christopher says companies probably won't feel good about hiring and investing again until the country grows above its 3% average prior to the recession.

The economy appears locked in a self-defeating cycle, where consumers won't spend more unless the jobless rate improves and companies won't hire more until GDP growth steadily recovers -- like two gunslingers, both waiting for the other to draw first.

"It's like you've been through a terrible accident and you're waiting for something to make you feel better again," he says.

Christopher may be right, but that 'something' likely won't be the maxed-out consumer.

Beware the VAT: Why the consumption tax is possible