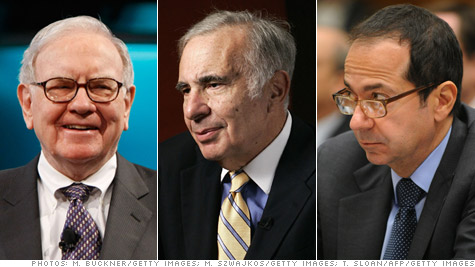 Here's what Warren Buffett, Carl Icahn and John Paulson did in their portfolios in the second quarter. By Blake Ellis, staff reporterAugust 17, 2010: 6:09 PM ET

NEW YORK (CNNMoney.com) -- Whether it has been investing in gun manufacturers and energy companies or ditching food suppliers, America's best known investors were busy in the second quarter.

Here's what a few of them were up to, according to recent filings with the Securities and Exchange Commission.

The conglomerate reported that it acquired 4.4 million shares of payment processor Fiserv (FISV, Fortune 500) to its portfolio -- a new position for Berkshire -- and boosted its stake in health care companies Becton Dickinson (BDX, Fortune 500) and Sanofi-Aventis (SNY).

At the same time, Berkshire cut its stake in oil company ConocoPhillips (COP, Fortune 500) by 15% and shed shares of Kraft (KFT, Fortune 500) and Procter & Gamble (PG, Fortune 500), reducing its stake by about 1% in each company during the quarter.

It also upped its position in natural gas company Chesapeake Energy (CHK, Fortune 500) to 12.7 million shares from 2 million in the first quarter, an investment worth nearly $267 million at the end of the second quarter.

Icahn also added gun maker Smith & Wesson (SWHC) to his portfolio in the second quarter, buying more than 2 million shares of the company.

Other new additions include snack food provider Hain Celestial (HAIN) and Mentor Graphics, and the fund raised its stake in film studio Lions Gate Entertainment, which Icahn is trying to acquire outright and Motorola.

At the same time, the company ditched pharmaceutical provider Adventrx (ANX) and cut its stake in struggling video rental company Blockbuster (BLOKA) by 79%.

John Paulson: Paulson & Co., a hedge fund led by John Paulson, who became famous this year due to his alleged role in helping Goldman Sachs (GS, Fortune 500) create securities that were designed to fail, took a new position in Goldman and upped its stake in other financial firms during the second quarter.

Paulson disclosed that the fund acquired 1.1 million shares of Goldman by the end of the second quarter. It also reported new stakes in mortgage insurance company PMI Group (PMI) and said it increased its position in insurer Hartford Financial.

Like Icahn, Paulson boosted its energy industry holdings, adding Exxon Mobil (XOM, Fortune 500) to its portfolio with the purchase of 9 million shares of the company in the second quarter.

Meanwhile, the fund reduced its position in CIT Group (CIT) by 24% and cut its stake in Boston Scientific (BSX, Fortune 500) by 19%.

Why these billionaires are pledging away their wealth
First Published: August 17, 2010: 1:12 PM ET