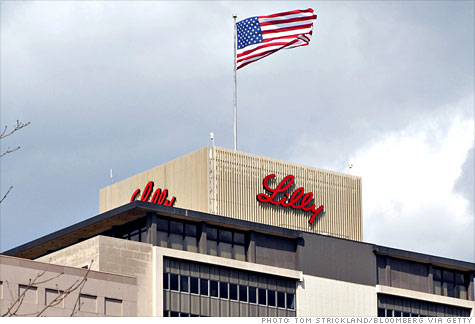 FORTUNE -- In 2009, Eli Lilly CEO John Lechleiter introduced a new drug development strategy called the Development Center of Excellence. The center's mission is to help target funding towards projects that were going to produce drugs soon, which Lilly desperately needs. The problem is, science doesn't generally bend to the will of CEOs or planning documents. And Lilly's (LLY, Fortune 500) plan cries out of a company racing to crank out a blockbuster and staring down competition from newly merged, super-sized competition.

The company has been in an innovative rut for a while, having launched only one new drug in the last five years. The drug, a blood thinner called Effient, has only raked in about $60 million in sales since the drug was launched in the second half of 2009, compared to a Bristol-Myers Squibb drug Plavix, which took in $9.8 billion. Worse, a recent study shows Effient may cause a higher incidence of cancer tumors than Plavix does.

Update: Eli Lilly responds, noting: "It is important to note that the hypotheses [about Effient's cancer risk] have been previously presented and published as well as reviewed, discussed at length and addressed by the U.S. Food and Drug Administration," and says the drug is "unlikely to be linked to cancer."

Lilly has some more recent pressing problems too. It just pulled the plug on expensive, late-stage clinical trials for a risky new Alzheimer's drug called semagacestat that the company said was ineffective and too costly to continue funding, and more importantly, may not have even cured or alleviated Alzheimer's patients' symptoms anyway.

This is happening when Lilly's best-selling products are on the verge of becoming generics. The company's top drug, Zyprexa, used to treat patients with schizophrenia, will open for generic production at the end of 2011. Others will hit the patent cliff soon, and so far, Lilly hasn't been able to stall the process. This summer, two drugs -- attention deficit hyperactivity disorder drug Straterra and cancer drug Gemzar -- faced lawsuits related to patent problems. Those lawsuits, brought by generic drug manufacturers seeking to compete with Lilly, have so far both been breaking on the side of the generic manufacturers, further exacerbating Lilly's problems.

It's a common move for companies to tie up drug patent rights in the courts to keep them from going generic, and it generally prevents patients from getting cheaper drugs. Another tactic that pharmaceuticals typically use that gets heightened in crisis mode is to stretch the application of current drugs to reach other markets.

Lilly is trying to do this with its depression drug Cymbalta. The FDA reviews the case for alternative uses of the drug today - including whether it can be prescribed as a treatment for back pain. But analysts are talking like the company has already lost.

The pipeline buzz, or lack thereof

There isn't much excitement for some of the drugs that Lilly has in the pipeline. It co-funded development of the diabetes drug Bydureon along with a couple of other companies. But Bydureon will have to compete with other similar drugs on the market, and analysts don't expect it to be the blockbuster that Lilly needs.

Lilly just bought biotech Alnara in July in hopes of getting the smaller company's drug candidate liprotamase ready for the market. It's waiting for FDA approval for liprotomase now.

Lechleiter claims that Lilly will have ten new substances ready to go into late-stage trials by the time it loses Zyprexa-the end result of his attempt to optimize drug research with the Development Center of Excellence.

The strategy has meant breaking up research divisions into five categories: diabetes, cancer, animal health, emerging markets and established products. He's also condensed two phases of clinical trials so that studies can test the efficacy of different concentrations of drugs at the same time. Trials of concentrations that don't work get dropped, which cuts out the lag time that typically happens between phase II and phase III trials.

Lechleiter's also giving over more of the company's revenue to R&D than others in the industry. This is generally good for drug development-funding basic research is the best way to generate good science. But pharma companies can't survive on good science alone. Drugs still need to be cleared by the FDA, then be received well by doctors and patients to really succeed.

And Lilly needs a money-maker soon. Analysts have been grumbling that the company should follow in the footsteps of other Big Pharma players with their backs against the wall and buy a promising big biotech or merge with Bristol Myers Squibb (BMY, Fortune 500), something the company has rejected. In January, Pfizer (PFE, Fortune 500) paid $68 billion in cash and stock for Wyeth to spur an influx of fresh drugs.

But Lechleiter is holding out, banking on the fast track drug development strategy, and only considering acquisitions of the non-mega variety, which would buck current trend of the pharma industry and leave Lilly smaller than its competitors. If Lechleiter can pull off that strategy, he will have made a breakthrough about how to reign in the scientific process.

The problem is that innovative research rarely works best when it's under the gun to show results. That's a big reason top talent leave big pharma to incubate ideas for single molecules in small biotech startups. And Eli Lilly, with its huge needs for growth, might exacerbate the structural problems that already exist in the chain of developing molecules all the way to getting high quality pharmaceuticals for patients.

Take Lilly's recent moves. To survive, the company has legally tied up drugs that could go generic and be cheaper for patients, stretched the application of a blockbuster drug it already has to apply to other medical conditions, and gone for broke with an expensive late-stage trial for it's Alzheimer's drug, which would likely have been the first to market, only to bust instead.

Setbacks do happen, though, even in late stage trials. Patents need defending. And the idea of beefing up the research division could be revolutionary, if it works. But it has to work soon. If it doesn't, then the failure of Lechleiter 's plan will serve as a warning that companies striking out against industry trends do so entirely at their own risk.

Why J&J's headache won't go away