A bitterly divided Congress, fanned by the White House 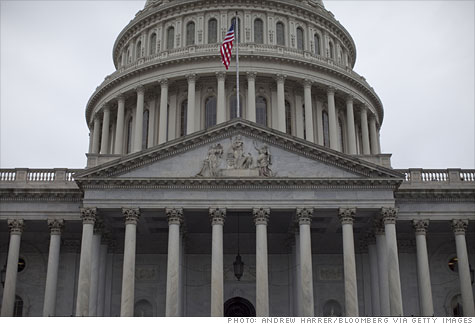 FORTUNE -- "This committee doesn't function well on a partisan basis, and in the 22 months that I've been chairman of it we've never acted that way." That was Senate Banking Committee Chairman Chris Dodd speaking in December of 2008, when American voters had the audacity to believe a new President's promise to rise above the short-sightedness of partisan Washington and unite most Americans around solving big problems.

Flash forward to August 2010, and the retiring Democratic senator from Connecticut has changed his tune, telling Washington Post columnist E. J. Dionne that working across the aisle is vastly overrated. "There's nothing wrong with partisanship," Dodd proclaims, noting that in the early decades of the republic, Congress was "a brawl."

Dodd presided over his own brawl this summer when he squeezed a massive financial reform bill through the Senate without the backing of a single Republican member in his committee. Of all the failures at bipartisanship -- the $862 billion stimulus package and the $940 billion healthcare reform chief among them -- the new "Dodd-Frank Wall Street Reform and Consumer Protection Act" stands as the most egregious.

Why? Because it squandered a rare moment in Washington, one in which broad outlines of agreement had already emerged from serious-minded lawmakers negotiating in good faith. Because senators were acting the way American voters -- who repeatedly tell pollsters they are disgusted with Congress -- expect their elected officials to act. Because a full year of hard bipartisan work fell prey to election-year politics.

With Dodd-Frank (named also for House Banking Committee chair Barney Frank) now signed into law, Washington moves into a ritual so familiar it's like comfort food: government regulators drafting more than 200 rules, law firms auditioning to show prospective clients that they can maneuver the new rules, business pages guessing at likely candidates to oversee it all.

But on Capitol Hill, the experience added a new layer of bitterness and distrust that will haunt Congress when it returns after Labor Day to stare down a deep, dark well of troubles -- jarringly high unemployment, a mounting debt that threatens the nation's fiscal solvency, immigration fears creating emotion-charged divisions.

Sadly, that wasn't Dodd's original intention. Senators on both sides of the aisle tell me the banking committee chairman was determined to bring both sides together. (A spokesman said Dodd was not available to comment for this column.) "Left to his own druthers, Chris Dodd would have produced a really good bill that would have been bipartisan," says New Hampshire Senator Judd Gregg, a Republican.

Last winter -- as the poisonous divide over healthcare engulfed Washington -- Senate banking committee members, at Dodd's direction, were meeting in pairs to hash out major portions of a complex bill aimed at preventing a repeat of the 2008 financial crisis. Republican Bob Corker was paired with fellow businessman Mark Warner, Democrat of Virginia, to hammer out a way to prevent massive financial firms from holding the economy hostage -- commonly known as the "too big to fail" conundrum. Gregg and Democrat Jack Reed were tasked with addressing derivatives; ranking GOP member Richard Shelby and Dodd were working on consumer protection provisions, and so on. "We realized these issues don't break down on a left-right continuum," Warner says.

Senators and their staffs, who had already worked across party lines in dozens of formal and informal hearings, were meeting around the clock. There was a certainty among the senators that their efforts would not end in the brawl that healthcare had become. Everyone agreed that the laws governing the nation's financial sector needed reform. "The banking committee is the one place where I actually feel like a senator," says Corker, "where we talk about substance, and not in a partisan way."

So, what happened? In March, the Obama administration began to smell a better election-year opportunity. "We were so far down the road when, out of nowhere, the President and his people decided to make this a political exercise," charges Gregg. "The White House was getting pummeled on their programs, especially healthcare, and they needed a bad guy, so central casting sent them Wall Street. The bill got caught up in pandering populism."

That's a Republican charge. But Democrats privately acknowledge that White House pressure played a role in the ultimate decision by Dodd to pick off just enough Republicans to get the bill through the chamber -- rather than seek broad bipartisan agreement. According to a detailed account in the Washington Post, President Obama met with Dodd in mid-March, told him that GOP ranks were fraying and suggested he pick off votes from the same tiny handful of Republicans who had supported healthcare and the stimulus.

Ultimately, that is what Dodd did -- rather than entertain substantial compromise with thoughtful Republicans on his own banking committee, like Gregg and Corker. With the White House weighing in, the March winds shifted on Capitol Hill. Corker had been conducting a one-on-one negotiation with Chairman Dodd and says they were "down to the five-yard-line." But one morning that month, Dodd's demeanor changed. "I could just tell he felt loose, wobbly, not fully engaged. I've been in enough business deals that I can tell when your partner is getting a little wobbly." The following day, Dodd told him he was losing Democratic votes on the left: "Bob, I've got to move on." Says Corker: "I was livid."

It is true, as Democrats charge, that the Republican leadership was "obstructionist" on the bill -- but by then the Democrats were already moving forward with a plan to pick off just enough GOP votes to clear the Senate.

The banking committee's ranking GOP member -- a target of the obstructionist accusation -- insists he started out seeking a bipartisan bill that would attract 75 to 80 votes. "Why did we not have a bipartisan bill?," asks Shelby. "The Democrats didn't want one and they didn't have to have one. We had two or three Republicans who left the fold at crucial times." The law that President Obama signed July 31 narrowly passed with just three GOP votes in the Senate.

Congressional Democrats and the White House viewed this narrow victory as the ideal election-year calling-card: Tell voters that the Republicans opposed reform because of their ties to Wall Street special interests.

In fact, though, it's not clear the strategy will pay off on Election Day. Democrats face a Republican counter-attack that the law is "government power grab" that will constrict credit and hurt Main Street rather than Wall Street. And voters, so far at least, aren't thrilled with the complex new law. A Bloomberg poll found that four out of five America have little or no confidence that it will prevent another crisis. Meanwhile, the law stands as another lesson in why Americans have lost faith in Washington. This time, though, the problem was less Congress than the White House. Despite all the handwringing these days about our "broken Senate" Senate Banking Committee members, left to their own devices, likely would have crafted legislation with broad support.

Behind the war between Obama and big business
Subscribe to Fortune