Behind the war between Obama and big business 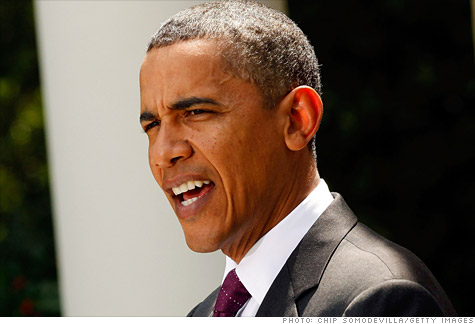 FORTUNE -- Corporate chiefs may seem hardboiled, but they can be sensitive, too. Take the ruckus they've been raising over what they perceive to be rough treatment from the Obama White House.

The bubbling resentment of the administration among top corporate brass burst into the open in late June, when Verizon (VZ, Fortune 500) CEO Ivan Seidenberg addressed a lunchtime crowd gathered at a hotel in downtown Washington. "By reaching into virtually every sector of economic life, government is injecting uncertainty into the marketplace and making it harder to raise capital and create new businesses," he said.

The critique was remarkable because Seidenberg was speaking in his capacity as chairman of the Business Roundtable, a trade group representing 170 top CEOs and, until recently, Obama's last apparent ally among the major Beltway business collectives. The White House identified Seidenberg himself earlier this year as one of four chief executives whom Obama admires.

Seidenberg and others have been laying out substantive cases for how the administration's economic agenda is failing to foster growth -- pointing to regulatory uncertainty about how the health-care and Wall Street reform bills will be implemented, and complaining about what they call anti-competitive tax policies.

But there is another, more personal reason for the souring. Obama's rhetoric on the stump, they say, has been overly broad and overly harsh in blaming big business for the nation's economic woes. The charge has developed into a refrain. U.S. Chamber of Commerce president Tom Donohue said the administration's push to overhaul health care, and financial and oil regulations has left companies "demonized."

Billionaire real estate and media mogul Mort Zuckerman, appearing Sunday on CNN's State of the Union, said the White House has "done something here that affects everybody's confidence in the attitudes of this administration to the business community and to the economy. They have demonized the business world." Even ousted BP (BP) chief Tony Hayward, a man deserving of rebuke if there ever was one, this week complained he was "demonized and vilified" in the U.S.

Democrats countercharge that the complaints from business leaders are overblown and misplaced. They argue Obama and his party made painful decisions to avert an economic catastrophe: bailing out the automakers, saving the banks without nationalizing them, and passing a massive stimulus package that they say wrenched the nation out of a tailspin. And they point as proof of their success to the performance of the private sector: second-quarter profits so far show big businesses are humming again, far outpacing analysts' estimates.

That said, Democrats have made an attack on major industries an explicit part of their campaign message. The majority wants to make the election a choice between the two parties as opposed to what the GOP is pushing for -- a referendum on the party in power. To do that, since spring, party leaders have hammered on a contrast they hope will stick: Democrats stand up for Main Street, while the GOP champions Wall Street; Democrats are for patients and doctors, while the GOP is for insurance industry profits; Democrats want to protect small businesses in the Gulf, while the GOP protects the oil companies. Et cetera.

For some CEOs, the tack appears to be confirming long-held suspicions that Obama is fundamentally anti-business. George W. Bush tried to hone an image as the CEO president, stocking his cabinet with former corporate captains. Obama appointed none. But he named some to an advisory board -- and assiduously solicited input from a range of them. Seidenberg, for example, acknowledged he has been to the White House 16 times.

One Democratic lobbyist says CEOs, after plenty of face time with the President, now believe it hasn't amounted to much. "There's a lot of talk, but not a lot of action," he says. Seidenberg's speech last month, for example, came a day after the Business Roundtable responded to a White House request by sending budget director Peter Orszag a 54-page report outlining pending regulations they believe will stifle growth. Many now question whether their letter will do anything but gather dust.

Jim Kessler, vice president for policy at Third Way, a business-friendly Democratic think tank, attributes the White House's rhetoric to the need to sell moderate legislative wins to a dispirited base. "When your legislation moves to the center, your rhetoric has to move to the left," he said. "And even sophisticated business people are not going to read a 2,000 page bill, so what they hear is the rhetoric."

But the danger for the White House in going after corporate bigwigs too aggressively, Kessler said, is that Americans are still fundamentally pro-business. A recent survey his group commissioned from Benenson Strategy Group, Obama's campaign pollster, found 63% of Americans think "most American companies value their employees and treat them well." A minority felt large companies have too much power and hurt the middle class -- and a majority believe the private sector, rather than the government, will be the engine of the economic recovery.

Some of the short-term political fallout for Democrats is already evident. The party's fundraising from major Wall Street donors has fallen off a cliff, with collections out of New York down 65% since two years ago, according to a recent Washington Post report. Many of those donors now sitting on their wallets had been important boosters for Obama in his campaign -- like J.P Morgan Chase (JPM, Fortune 500) CEO Jamie Dimon, who has cut off donations to the Democratic party committees and written a check to Mark Kirk, the Illinois Republican seeking Obama's old Senate seat.

The disconnect with Wall Street, in particular, was brought into fresh relief this week as Obama traveled up to New York on Wednesday for back-to-back fundraisers. Both high-dollar events -- one at the Greenwich Village home of Vogue editor-in-chief Anna Wintour, the other at the Four Seasons Hotel -- sold out, according to the Wall Street Journal. But a Democratic fundraiser told the paper that anger toward Democrats among financial services executives will limit repeat engagements in town -- and that Wall Street types asked to attend the events this week were either uninterested or only wanted to come so they could complain to the President.

How will Obama fix this problem? Jeffrey Garten, a professor of international trade and finance at the Yale School of Management, said he thinks the administration "is going to try to meet these guys halfway, because it's genuinely concerned that the sour attitude will translate into a lack of investment." Obama has already signaled he wants to get moving on stalled trade agreements with Korea, Colombia, and Panama.

"It's going to be better in the short term," predicted Garten, author of "The Mind of the CEO." "He'll bring in one or two business leaders into the administration, if he can find them. And he'll try to cut a deal in which the rhetoric stops, and he finds some things that both he and the business community can say they're going to go forward on, on a congenial basis."