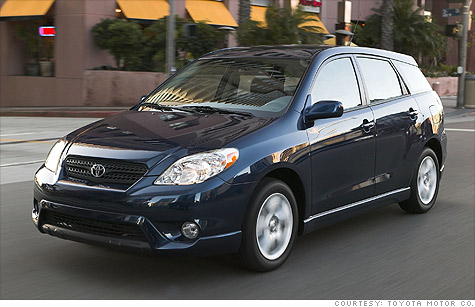 The issue, as described by NHTSA, is that the "engine can stall at any speed without warning and not restart."

The agency had opened a "preliminary investigation" into the problem at the end of November. At the time, the investigation involved only model year 2006 Corolla and Matrix vehicles. (The Matrix is essentially a wagon version of the Corolla.) That matter has now been upgraded to an "engineering analysis," a more detailed and thorough type of investigation.

The investigation now involves model years 2005 though 2007. Together, NHTSA and Toyota have received as many as 1,100 complaints of engine stalling, including six cases that involved crashes or fires, according to NHTSA documents.

By the time NHTSA opened its preliminary investigation, Toyota had already found two possible causes for the engine problems, according to NHTSA documents, both involving manufacturing problems with the engines' electronic control units.

"Based on its analysis, Toyota does not believe the alleged defect creates an unreasonable risk to motor vehicle safety," Toyota said in a letter to NHTSA dated March 2, 2010.

The automaker believes that, when there are problems with the electronic control unit, engine stalling is preferable to allowing the engine to run, risking a possible "catastrophic failure" or fire, Toyota said in the letter.

The letter, which was written in response to NHTSA's request for information, also provides details of some steps Toyota had already taken to deal with engine problems relating to the electronic engine control units on the Toyota models in question.

Toyota spokespeople were not immediately able to respond to a request for comment on the matter.

Another Hyundai exec jumps to GM