SABMiller - Foster's: The latest froth in a heady M&A environment 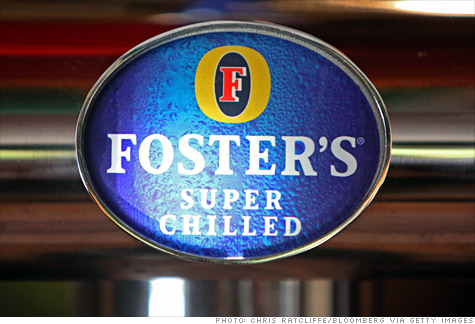 FORTUNE -- Consumers may be buying a little less beer these days, but beer companies can't seem to get enough of the stuff. The latest indication that brewers see a frothy future came last night when reports circulated that SAB, the world's second largest brewer, had eyes for the brewing arm of Australia's Fosters Group, and was willing to spend nearly $11 billion to take it home.

Neither company would confirm the talks over Foster's Carlton & United Breweries, which were first reported by the Sunday Times of London. And it remains unclear whether the idea of such a merger should be considered a nascent economic green shoot or just a nod to the willingness of the world's consumers to drink through crises. But the thought will certainly add some more excitement to the M&A crowd, which has already seen a slew of merger announcements take the angst out of a traditionally slow August.

Such mergers have increased as organic growth at cash-rich companies has faltered, as stock prices have remained relatively low and as debt to fund acquisitions has continued to be cheaply obtained. But they wouldn't occur if the acquirer didn't believe better times lay ahead.

A takeover of Carlton & United Breweries by SABMiller would certainly follow current logic in the beer industry, which has profited through consolidation - such as InBev's $52 billion takeover of Anheuser-Busch's in 2008 - even as companies have grappled with a sudden small decline in beer consumption after a decade of steady growth.

With their volumes now slowly sucked away by wine and spirit makers, and craft brewers cornering a segment of the premium market, the largest brewing companies have sought to increase their volumes and decrease their costs through acquisitions. Brewers like Molson Coors (TAP), Heineken International, Anheuser-Busch InBev (BUD), Carlsberg and SAB Miller have continued snapping up rivals with strong local brands, particularly in hot developing markets overseas.

In July, Valueline equity analyst Rich Gallagher called it "something of an arms race," noting that consolidation continued "to wash away the number of brewing companies in the global beer market."

SABMiller, with $37 billion in revenue, is about half the size of InBev now, after once being its larger rival. It already owns the rights to brew Carlton & United Breweries Foster's lager in the United States. But the deal would likely help the company, whose brands include Miller Genuine Draft, Peroni Nastro Azzurro and Pilsner Urquell, further reduce costs and gain traction outside America. Shipping beer is expensive, so the ability to brew major brands near where they are sold cuts down on the cost of introducing new lines or solidifying market share already gained.

SABMiller generates 85 percent of its profits overseas. Through CR Snow, a joint venture, the company has become the largest brewer in fast-growing China. Last week, SABMiller noted that economic growth in countries such as Colombia and South Africa, two of its major markets, helped it beat analysts' sales estimates.

Australians drink a great deal of beer, coming in fourth in per-capita consumption, just behind Germany, Ireland and the Czech Republic. Taking over Carlton & United Breweries would give SABMiller control of roughly half the market there. Carlton & United generates among the highest margins in the industry, brews Victoria Bitter - Australia's most popular beer for two decades - and has other leading brands in growing markets such as Singapore and Hong Kong.

Asahi, a Carlton & United partner and Japan's second-largest brewer, is also reportedly interested in the Foster's brewery; Molson Coors has been spoken of as another possible suitor. Whether any such merger would reward stockholders remains up for debate. Plenty of studies have questioned the benefits of growth through acquisition. Foster's Group admitted as much in May, when it finally announced plans to split its beer and wine divisions after a decade of trying to make those synergies pan out - they didn't.

Large companies with far-flung operations can also become harder to manage, and beer producers, no matter how large, are still at the mercy of economic realities somewhat beyond their control. While people continue to drink beer in a recession, the most recent economic malaise has shown that the unemployed still drink less - 2 percent and counting in the US. And if the current worries over deflation finally reverse, higher commodity and shipping costs could take a bite out of brewers as well. As Standard & Poors noted recently, brewers' margins have benefitted from the lower aluminum and gas prices that followed the global downturn.

That said, brewing is certainly not the worst industry for a troubling time, and when stocks aren't riding high in a bull market, it's easier to make expectations and synergies work out as planned. But, as with everything else, investors should probably drink in beer stocks with a dose of moderation.

Let's hear it for hipster beer
Subscribe to Fortune