Co-chair of Obama debt panel under fire for remarks 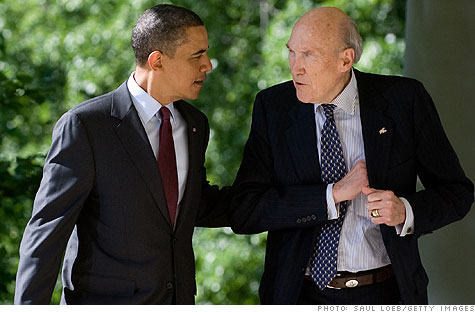 Alan Simpson is under fire for remarks he made to a group opposing cuts in Social Security benefits. By Jeanne Sahadi, senior writerAugust 25, 2010: 4:07 PM ET

NEW YORK (CNNMoney.com) -- An advocacy group is calling for the ouster of former Sen. Alan Simpson, the co-chairman of President Obama's bipartisan debt commission, who described Social Security as a "milk cow with 310 million tits!" in an email.

Ashley Carson, executive director of the Older Women's League, wrote in a blog post in April that Simpson is targeting Social Security to fix the deficit even though it "doesn't contribute" to the country's debt problem. She also accused Simpson of "disgusting ageism and sexism" in characterizing those who oppose cuts to benefits as "Gray Panthers" and "Pink Panthers."

In his email to Carson, which was sent Monday night, Simpson said he is defending Social Security, not trying to undermine it, and referred her to information showing the program's long-range shortfalls.

He went on: "I've made some plenty smart cracks about people on Social Security who milk it to the last degree. You know 'em too. It's the same with any system in America. We've reached a point now where it's like a milk cow with 310 million tits! Call when you get honest work!"

On Wednesday afternoon, Simpson released a letter to Carson apologizing. "I can see that my remarks have caused you anguish, and that was not my intention," he wrote.

Simpson, a former Republican senator from Wyoming, is well known for his salty language and down-home analogies when debating policy. His remarks have made him a target for critics of Social Security reform, who have called for his resignation before.

Reforming Social Security has always been a political lightning rod, and none more so than this mid-term election year. Simpson's remarks could further inflame an already divisive debate and complicate the task of the bipartisan commission, which is attempting to broker solutions that both sides of the aisle can support.

A coalition of groups including MoveOn.org, Social Security Works and others have pledged to "fight any effort" by the commission to cut benefits or raise the retirement age.

Such groups say that Social Security hasn't contributed to the country's fiscal woes since $2.5 trillion of surplus revenue was paid into the system over the years and borrowed by Uncle Sam.

Carson of OWL wrote that cutting defense spending should be the commission's first line of attack, and the Bush tax cuts second, when finding solutions to U.S. debt problems.

Nonpartisan deficit experts say the debt trajectory for the country is so worrisome that nothing in the federal budget can be off the table. That includes Social Security, which will only be able to pay out roughly three-quarters of promised benefits to future retirees by 2037.

OWL sent a letter to the White House on Tuesday calling for Simpson to be removed from the commission.

"We have given the former senator several chances at redemption, but his email today ... illustrates his clear disrespect for Social Security, women and the American people, highlighted by his degrading, sexist, ageist and profane language," OWL wrote.

In his apology on Wednesday, Simpson said that he "did not intend to diminish" Carson's work. "I know you care deeply about strengthening Social Security, and so do I, just as deeply."

He also extended an invitation to Carson to meet in person to discuss her concerns the next time he was in Washington.

In response, Carson said in a statement that she appreciated Simpson's apology. But she noted that OWL's position remains unchanged in calling for Simpson to step down.

"Mr. Simpson has demonstrated a consistent, decades-long, pattern of making statements that are offensive to seniors, to women and that are just plain unacceptable in 2010."