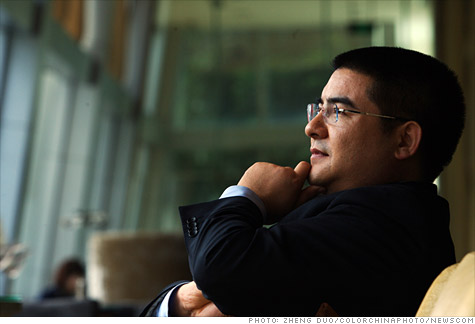 Chen Guang-biao, 42, made a fortune in the demolition business. He pledges to give it all away. by Bill Powell, contributorSeptember 10, 2010: 11:13 AM ET

FORTUNE -- It's already become known as the Billionaires Banquet in Beijing -- a gathering set for September 29th, hosted by two of the richest and most famous businessmen in the world: Warren Buffett and Bill Gates. Their guests are supposed to be 50 of their recently minted brethren from China, the richest of the newly rich in the world's fastest growing economy -- now the world's second largest, and someday destined to be the biggest.

You'd think the money and business obsessed Chinese elite would be beating down the door to attend such an event, to offer toasts and swap pearls of financial and business wisdom with the two American legends. And you'd probably be right, were it not for one thing: Gates and Buffet are coming to push their pet cause -- the so called Billionaires Pledge -- trying to persuade the rich, no matter where they may live, to donate half of their wealth to charitable causes.

In the United States, this is hardly the stuff of controversy. Charitable giving is a core American trait -- having two of the richest in the land out stumping for the wealthy to be ever more generous is a dog bites man story. To most Americans, they might as well be telling kids to do their homework and eat more vegetables.

Which is precisely what makes the reaction in China to the forthcoming banquet so interesting: the response so far has apparently been underwhelming. The first thing at least a few of the invited did was to call and quietly check to make sure they weren't going to have the arm put on them immediately. A "small number" of the more than 50 invited guests called to ask if they would be required to pledge a donation at the dinner, says Jing Zhang, press officer of the Bill and Melinda Gates Foundation, which is coordinating the Sept. 29 event. The answer to that was no -- all Gates and Buffett want to do is talk.

The conversation could be interesting. The accumulation of big time wealth is obviously a relatively new phenomenon in modern China. In the last thirty years, since Deng Xiaoping's economic opening, this country has created a staggering number of wealthy people: a survey called the Hurun report, which tries to keep tabs on just how many rich Chinese there are, pegs the number of millionaires at 875,000 -- a figure which, to put it politely, is a conservative estimate. (To put it impolitely, it's ludicrously low.)

But since the vast, vast majority of Chinese citizens still get by on $100 a month or less, the gap between rich and poor is large and getting larger -- and thus is an extremely sensitive issue for the government in Beijing. Add to that the fact that tax collection tends to be haphazard, and that corruption remains a major issue in China, and you can understand why so many rich Chinese work very hard NOT to stand out. The idea of holding a press conference, as Buffett did famously four years ago, to say you're going to give it all away only draws scrutiny of the kind that few Chinese want (`well, just how much do you have, anyway...?'). Merely showing up at the Buffett and Gates dinner will be sufficient to create a whose-richer- than-whom frenzy in China's blogosphere that not many of these newly rich tycoons can really want.

The most notable exception to this general rule so far has been Chen Guang-biao, a businessman from Jiangsu, one of China's most prosperous provinces. He started in the demolition business (modern China has done an awful lot of blowing up the old to make room for the new) and now runs a company called Jiangsu Huangpu Renewable Resources, which takes material from old, demolished buildings and recycles it into usable products. Chen announced on September 7 that he would leave his entire fortune -- estimated last year at around $660 million -- to charity.

"It's a noble and great move to return your fortune to the world when you are about to leave," he says, "and shameful the other way if you die with it. So I will donate all my property to philanthropy instead of just half of it when I'm leaving."

In an interview with Fortune, Chen said flatly that he doesn't think a sufficient number of wealthy Chinese "have the right values" to donate more to charity, but he believes over time China will be as philanthropic as any other country. Chen says he was motivated to go public with his pledge in part because he had heard that the response to the Buffett-Gates dinner had been lackluster. That, needless to say, is not going to win him a lot of friends among his peers in today's China.

It'll likely be awhile before Chen has to make good on his pledge. Like most of China's new rich, he's a young man -- just 42. But he is already China's most prominent philanthropist. He was out front responding -- in terms of both money and material -- to the devastating Sichuan earthquake in 2008, and again when a quake hit the rural province of Qinghai earlier this year.

And, to be fair, philanthropy in China is growing, albeit from a small base. According to the Hurun Report, China's fifty most generous contributors last year donated $1.2 billion, or an average of $25 million. That's chump change by U.S. standards, but it's eight times the average in 2004, when Hurun first began reporting on charitable donations in China.

But the attitude Chen and those following in his wake evince toward charity remains distinctly rare in today's China. The country's private entrepreneurs, many of whom started small, family businesses, believe wealth should be kept in the family and reinvested (something that's easy to do now given that China has talked for years about implementing an inheritance tax but still hasn't.)

More typical is the attitude of Zong Qing Hou, the CEO of beverage maker Wahaha, who topped Forbes' list of the richest people in China this year. He admitted he turned down an invitation to the Billionaire's Banquet because of a scheduling conflict. But, he told a Chinese newspaper, "from the bottom of my heart I don't appreciate this sort of thing. Real charity, he said, means creating real fortunes for society -- entrepreneurs using the money to invest and create even more job opportunities and more wealth for a society. That's what our society needs."

Too bad he can't be at the Billionaires Banquet. With him and Chen at the table, the two Americans wouldn't have to do much talking. They could sit back and listen to the argument -- one that now, thanks to them, is front and center among China's very rich.