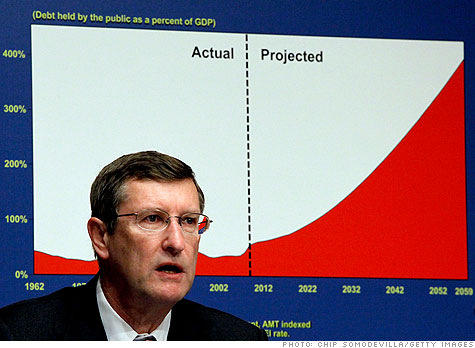 NEW YORK (CNNMoney.com) -- Did the federal stimulus plan work in fixing the economy?

That was the question confronting the Senate Budget Committee on Wednesday. The senators summoned some of the most renowned economists in the country to seek the answer -- but they failed to find common ground.

Taylor expressed his belief that the stimulus plan heralded by President Obama was expensive and ineffective, leaving the country worse off than before.

"Now, rather than leaving the economy in a stronger growth position, the interventions have weakened the economy and left it with the burdens of increased debt and higher government spending as well as concerns about future tax increases," he said in testimony before the committee.

Taylor said that two programs -- Cash For Clunkers that spurred new car buying and the first-time homebuyers program -- provided some spark but "did not increase economic growth on a more permanent basis."

But Blinder and Zandi, who co-authored a report on the subject a couple of months ago, said the massive stimulus may have avoided a repeat of the Great Depression that would have been practically inevitable without intervention.

"I believe that the policy response to the economic crisis was very successful," said Zandi. "Without that response, we would have suffered a 1930s-style Great Depression."

Zandi added that it's "no coincidence" that the recession ended in the summer of 2009 "when the stimulus was providing its maximum economic benefit via the temporary tax cuts and increases in government spending."

Not all the committee members were on board with this idea that the stimulus was worth the cost. Sen. Kent Conrad, D-N.D., committee chairman, hinted that heavy debt undermines the country's competitiveness when he said, "We have a tax system that was designed when we didn't have to worry about the dominant position of the United States."

Sen. Jeff Sessions, R-Ala., decried the stimulus plan for being "sold as an infrastructure bill" even though "only 3% or so of that money went to that, and it didn't create jobs."

Sen. Debbie Stabenow, D-Mich., said the nation's debt is something that "we have to deal with [in the] long term, but in my opinion, we won't be able to deal with while we have 15 million people out of work."

But despite that, Blinder didn't present a rosy view of the nation's future for factories.

"There has been for some 50 years now a decline in manufacturing," he said. "I think we have to accept it as a fact of life that [our] share in employment in manufacturing is in decline."