Tax cuts: Extend them but beware 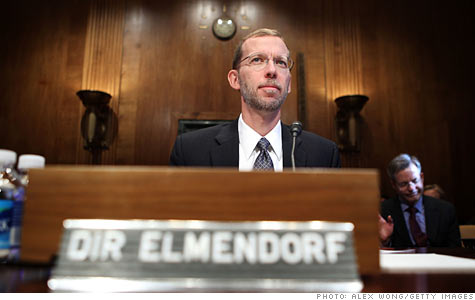 One problem: The subject dominating the economic policy debate right now -- the Bush tax cuts -- ranks low among temporary measures that might offer the best bang for the buck.

And making the tax cuts permanent without paying for them would be expensive and could constrain the country's economic growth prospects in the medium- and long-term.

Those are two key points that Douglas Elmendorf, director of the Congressional Budget Office, offered to the Senate Budget Committee on Tuesday.

CBO studied various options that could offer some economic pop over the next two years. Extending the Bush tax cuts ranked last. Topping the list were increased aid to the unemployed, reduced employers' and workers' payroll taxes and the full or partial expensing of investment costs.

Elmendorf wasn't telling lawmakers anything they hadn't heard before. In fact, he was reviewing and drilling a bit deeper on a CBO analysis first published in January.

Nor was he suggesting that extending the tax cuts would have no positive effects. To the contrary, he said, a tax cut extension "would raise output, income and employment during the next two years."

But for all the near-term benefits of keeping the tax cuts, it's a Jekyll-and-Hyde story when it comes to the longer run.

Elmendorf said all the tax cut scenarios would probably reduce national income -- none more so than if the tax cuts were made permanent.

"The problem is that if those tax cuts are not accompanied by other changes in the government budget, and are simply funded through borrowing, that borrowing crowds out other private investment in productive capital ... the computers, the machinery, the buildings, that are the source of long-term economic growth," Elmendorf said.

And that crowding-out will overshadow the positive effects of lower tax rates -- which typically boost households' incentives to work, save and invest.

A permanent extension of everyone's tax cuts would cost an estimated $3.7 trillion over the next decade. More than 80% of that cost is attributable to extending the cuts for the middle class, which both parties and President Obama have said they want to do.

To boost the economy in the short-term and improve the long-term debt outlook, Congress would have to offset the cost of stimulus with changes to taxes or spending that would narrow the deficit in the future.

It's doable, but not easy, he added.

Elmendorf's testimony came a day before the president's bipartisan fiscal commission holds one of its last meetings. The panel has a Dec. 1 deadline to recommend how to change the country's debt trajectory, which is universally described as unsustainable if no changes to the budget are made.

Both Senate Budget Chairman Kent Conrad, a Democrat from North Dakota, and the committee's top Republican, Sen. Judd Gregg, a New Hampshire Republican, are members of that commission.

During the hearing, Gregg questioned Elmendorf on the government's spending trajectory -- which is projected under Obama's proposals to represent about 24% of the economy by the end of the decade, well above the historical average and well after the economy recovers.

Elmendorf didn't bend to Gregg's characterization that spending is the "problem" driving the debt -- noting that how much the government spends reflects Americans' choices.

But he said that, like tax cuts, unpaid-for spending forces the government to borrow more and that could also have a crowding-out effect on private investment. An increase in tax rates would have a more negative effect on the economy over the long run than a reduction in government spending, Elmendorf added.

Given that a great number of Democrats and Republicans support permanent extension of the tax cuts for the middle class -- at a cost of $3 trillion over 10 years -- Gregg suggested that lawmakers should move past the Bush tax cut debate and focus on "reality."

"We should be focusing on the growth of this government from 20% to 24%, and how do we get that back under control? How do we get that into a manageable number, considering our revenue base?"

Conrad took a more middle-of-the-line stance. "It is very clear we are going to have to cut spending as a share of the economy. It is also clear to me we cannot afford to make permanent all of the tax cuts that are currently in the code ... what we need is tax reform."

The Bush tax cuts: What you need to know