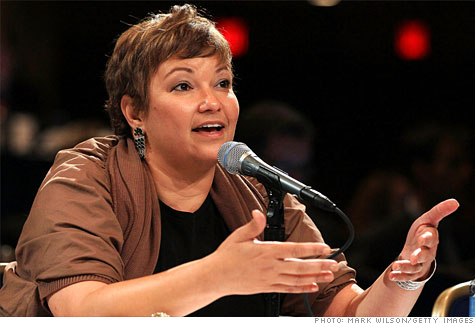 FORTUNE -- The Environmental Protection Agency has only recently had a face. That face has taken the form of Lisa Jackson -- the first African-American EPA administrator, appointed by Barack Obama in 2009. The landmark appointment caused a media stir, not for her race, but for the clean break with the recent past EPA administrators that her appointment represented.

Since then, Jackson has maintained a place in the spotlight and media circuit. Not only has she been a regular figure in the headlines, but she has brought the agency with her. (She's also #6 on Fortune's Most Powerful Woman D.C. Power List.)

Recently, the EPA has been front and center in the northeast because it's stepping in to a controversy about natural gas drilling, or fracking. The agency has scheduled hearings across the country where locals could voice their concerns about a fracking to a panel of four EPA members. The hearings brought policy-makers to the people.

Jackson seems keen to do that across the EPA's entire mandate. She's tech-savvy and transparent compared to other people who have been in her position. You can follow her through all kinds of social media, and many of the EPA's activities posted on the webpage call for public participation. She's been on David Letterman and the Daily Show with Jon Stewart. According to the EPA webpage, she's given 125 official speeches and public addresses since she joined the last year. Her predecessor Stephen Johnson made under 90 during his entire four-year term.

Jackson's credentials have probably prepped her to be more media savvy. Like Johson, Jackson worked for the EPA before being appointed administrator. But she has also been in the political game-she worked as chief of staff for New Jersey Senator John Corzine, and served as commissioner for the state's Department of Environmental Protection.

She has a science background, which is actually surprisingly new for the administration. The first professional scientist ever hired to head the EPA was Johnson, who made his mark with his work against legislative efforts to curb greenhouse gas emissions. Before him, Michael Leavitt was head administrator. Leavitt served as governor of Utah for a while, and worked as the CEO of an insurance company. He replaced Christine Todd Whitman, who left the EPA mid-term, allegedly because of former Vice President Dick Cheney's push to exempt companies from the pollution standards of the Clean Air Act.

Compared to her predecessors, Jackson has been a strong voice for policy to address climate change-although she's had some major setbacks, too, thanks to the frosty legislative climate. Probably her biggest has been the carbon cap-and-trade bill that Democratic leaders in the Senate threw out this past summer.

The bill would have been a big win for Jackson and the EPA, which would have been tapping into its ability to regulate greenhouse gasses via the Clean Air Act. Now the agency has to figure out how to cut emissions while keeping the industry happy, and re-think its strategy for navigating a sluggish Congress.

The stumble illustrates what may be the downside of being an accessible, even likable EPA leader. Jackson has positioned herself so prominently that she takes much of the heat from environmentalists when the agency falters, and faces resistance from industries to regulation that could actually break ground. It's a problem that has pervaded the entire Obama administration's tenure, as progressive goals repeatedly run into the political realities of doing business in Washington.

Yet with all eyes on Lisa Jackson, she could give the EPA some muscle that it's never had before. Or, if the administration can't get even compromise versions of its signature environmental agenda through Congress, she could end up, even in the eyes of environmentalists who lives through the Bush years, in the unfortunate and unfair role of scapegoat.