Does the EPA have the tools to regulate fracking?

FORTUNE -- (This article is part of Fortune's series on fracking .)

One issue the Environmental Protection Agency as constituted under President Obama has had to contend with is that it has stretched certain laws to give itself regulatory powers in areas the laws weren't designed to cover. Specifically, critics contend the Clean Air and Clean Water Acts are being used in unprecedented new ways. 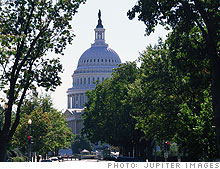 For example, there was an outcry against the agency enforcing the rules in the Clean Air Act when Congress threw out the carbon cap-and-trade bill. Congress members disagreed over whether the EPA should regulate greenhouse gas emissions under the Clean Air Act. At a hearing this summer, Senator Mike Johanns (R-Nebraska) claimed, "The Clean Air Act was never designed to allow you, the EPA to regulate Greenhouse Gas." The agency actually does have that authority, although the act wasn't designed for that purpose.

The same claim has been made throughout the controversy in the northeast over a drill stimulation method used by the gas industry, called horizontal hydraulic fracturing, or fracking. At a series of hearings on September 12-13 in Binghamton, NY, many people who spoke before a panel of four EPA members asked them to regulate fracking fluid-a combination of water, sand and chemicals injected into the ground to stimulate more production from natural gas wells.

Generally, fracking opponents believe the EPA has a right to regulate this water. Proponents of fracking argue that the Clean Water Act doesn't cover fracking fluid because it enters the earth far below the water table, and thus doesn't have a chance to pollute ground water.

The EPA, under its current authority, regulates the water after it comes out of the ground as wastewater, but not while it is below the surface. Yet after fracking, much of the water resurfaces from the well, where it's considered industrial wastewater. (While it's underground, fracking water is subject to any applicable state regulations.) The water issue is symptomatic of fracking regulation as a whole: During various stages of the hydraulic fracturing process, a patchwork of state and federal agencies take turns being the regulator.

Over the years, the act has been amended. In 1970, the act expanded to regulate emissions from industrial sources. In 1990, the act was modified again to include acid rain, ozone, and toxic air pollutants. Technically, this last modification includes greenhouse gasses.

The Clean Water Act progressed in a similar way. The first version of the Clean Water Act was the Federal Water Pollution Control Act of 1948, which authorized the Surgeon General to develop programs to prevent water pollution. Amendments in 1966 enabled the Secretary of the Interior to monitor the effects of pollution on recreation and fish and wildlife. The scope of the act grew under the EPA to include more kinds of contaminants and more types of water such as estuaries and wetlands.

As long as the acts keep morphing, which they will have to do to keep up with the pace of innovation and pollution, critics will be able to claim that they are being used to regulate beyond the areas they were designed to oversee. The argument almost takes on Constitutional qualities, the idea of original construction versus a living document. Similarly, Attorney General Eliot Spitzer was also criticized for his aggressive use of New York State's Martin Act to investigate and prosecute financial crimes, though notably the Martin Act circumvents several protections normally afforded to persons under investigation for commission of a crime.

What's apparent is that industry and technology are moving far more rapidly than the government or Congress can or ever will. By using these two acts in novel ways, the EPA is doing its best to keep up with the pace of energy exploration until legislators can empower it with laws written for the environmental scenarios that are playing out today in fracking operations in New York, Pennsylvania, Texas, and generally, across the entire United States.