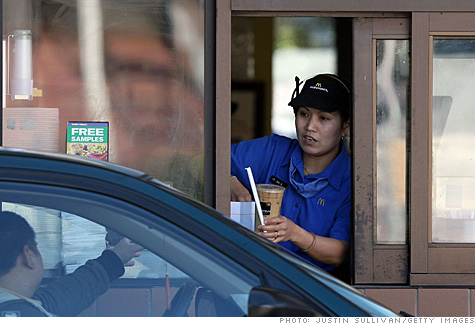 About 1 million workers aren't going to benefit from a key provision of the health care law that would have increased their insurance coverage to $750,000 in 2011. By Parija Kavilanz, senior writerOctober 7, 2010: 3:30 PM ET

NEW YORK (CNNMoney.com) -- Close to a million insured workers will lose out on a significant bump in insurance coverage promised by health reform next year.

McDonald's (MCD, Fortune 500), Jack in the Box (JACK) and other companies won a one-year exemption from a new rule requiring them to raise the maximum amount of coverage they offer employees.

Companies affected by the law were threatening to drop coverage completely or raise employees' premiums by as much as 200% in order to comply with next year's deadline, according to a government official familiar with the matter.

"We were in a situation where if we didn't take action, folks could lose their only source of coverage or pay an outrageously high premium. That wasn't acceptable," the official said.

"We want to ensure that in the time that it takes to implement the law, workers don't find themselves at the mercy of insurance companies jacking up rates," Gibbs said at a press briefing.

Beginning 2011, the new health law mandates that insurers and employers gradually remove annual dollar limits on an individual's insurance coverage and eventually eliminate these limits by 2014.

Cigna said the waiver applies to a plan tha covers about 250,000 people. The company also said it plans to ask for an additional waiver each year until 2014.

"We remain in conversations with our current provider and are confident that we'll continue to provide health care coverage for our 30,000 hourly restaurant employees," McDonald's said in a statement on Thursday. "We're pleased and encouraged by the progress that's been made by the Federal government on this issue."

The Department of Health and Human Services said waiver applications were taken on a "case by case basis." Among the factors officials consider are how much premiums would increase or how many employees would lose coverage without a waiver.

HHS spokeswoman Jessica Santillo said companies would again be able to apply for waivers next year.

Big changes to your health insurance