Mexico is a 'buy' - despite the violence 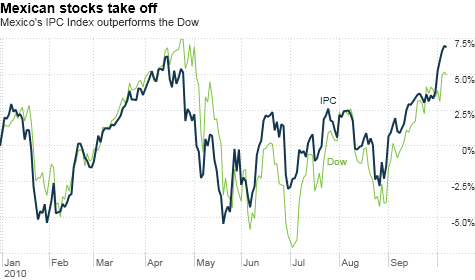 NEW YORK (CNNMoney.com) -- The Mexican stock market is going gangbusters this year despite a drug war that has claimed more than 28,000 lives.

This is one of the factors that prompted John Lomax, emerging markets equity analyst for HSBC in London, to upgrade Mexico to an "overweight" rating, in other words: "buy."

"We saw very strong growth in Mexico for the first half of the year," said Lomax, noting that the export-driven economy has bounced back from its dismal performance in 2009.

"Clearly the drug related issues are a problem for Mexico," he said. "Not withstanding that, the Mexican economy has been performing in a normal and familiar way."

This means that the Mexican economy is tracking the U.S., sharing many of the same benefits and problems.

The impact of drug violence -- which has been centered on cities near the border, like Ciudad Juarez, Tijuana and Monterrey - has had a mixed impact on the economy. Lomax said the violence has been "geographically concentrated" to certain cities, preventing widespread damage.

"This is an issue for Mexico, but that has not stood in the way of the economy having a normal cyclical recovery," he said.

Mexico's strong performance this year is in stark contrast to its GDP contraction of 6.9% in 2009 prompting Alonso Cervera, emerging markets analyst for Credit Suisse in New York, to raise his GDP forecast to a 4.7% gain in 2010.

But Cervera said that violence in Mexico presents a "clear threat" to the economy.

"It is true that most of the killings take place in certain locations, but I feel that the insecurity created by the killings and the extortions and kidnappings are having an impact on private consumer activity and private business investments," he said.

In a recent note to analysts, Cervera wrote, "It is impossible to estimate the cost that these problems have inflicted on economic activity - we are just in the process of finding that out. But clearly the cost of doing business in Mexico has risen."

Much is riding on the efforts of President Calderon to win the drug war that erupted when he took office in 2006. Since then, parts of the country have become a battle zone between cartels and federal police. Assassinations of public officials have become commonplace.

"When thinking of the many obstacles to stronger economic growth in Mexico, one has to think about crime," wrote Cervera.