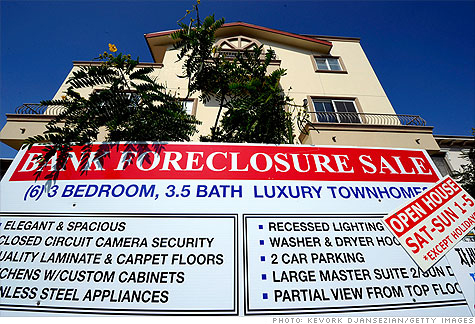 NEW YORK (CNNMoney.com) -- Bank of America is halting foreclosure sales in all 50 states as part of a widening investigation into flaws in the process, the company announced Friday.

The announcement came a week after the nation's largest bank said it was freezing home foreclosures in 23 states where foreclosures must be approved by the courts.

The bank said the foreclosure process on delinquent borrowers will continue, but it will not proceed to judgment or a foreclosure sale.

"We haven't found any problems in the foreclosure process," Bank of America (BAC, Fortune 500) President and CEO Brian Moynihan said in an appearance before the National Press Club in Washington. "What we are trying to do is clear the air, and say 'We will go back and check our work one more time.' "

The review process is likely to last a few weeks, Moynihan said.

Bank of America is not the only bank to freeze foreclosures.

PNC Financial Services Group also suspended sales of foreclosed homes on Friday, for a term of 30 days, according to media reports.

Frederick Solomon, a spokesman for PNC, declined to comment beyond saying that "PNC is reviewing its mortgage servicing procedures to make sure they comply with applicable legal requirements."

JPMorgan Chase (JPM, Fortune 500) announced last week that it will also halt proceedings for about 56,000 homeowners after learning that its employees may have approved foreclosures without personally reviewing loan files.

JPMorgan Chase had no comment on Friday's announcement by Bank of America.

Ally Financial, previously known as GMAC, the finance arm of General Motors, has also paused foreclosures in the 23 states.

However, Citigroup said it is making no changes in its foreclosure procedures. "At this point, we have no reason to believe our employees haven't been following our procedures, so we do not believe a suspension is necessary," spokesman Mark Rodgers said in an e-mailed statement.

State attorneys general have stepped up pressure on banks in recent days after it was revealed that some bank employees had signed foreclosure affidavits without verifying that the documents were accurate, a process now known as "robo-signing."

Ohio's attorney general has filed a lawsuit against Ally Financial and its subsidiary GMAC Mortgage for allegedly submitting fraudulent documents in hundreds of foreclosure cases across the state.

Ally declined to comment Friday when asked if they would follow Bank of America and expand their freeze.

"It is only fair to Nevada home owners to suspend foreclosures until a thorough review of foreclosure processes is completed and home owners can be assured that their documents are being analyzed properly," said Reid.

Sen. Christopher Dodd, D-Conn., the chairman of the Senate Banking Committee, announced Friday that he will hold a hearing to investigate allegations of improper mortgage servicing and foreclosure processing on Nov. 16, the day after the Senate returns from recess.

On Thursday, the White House said that President Obama won't sign a bill that could have made it easier for courts to clear foreclosures. The bill would have required federal and state courts to recognize documents that were notarized in other states.