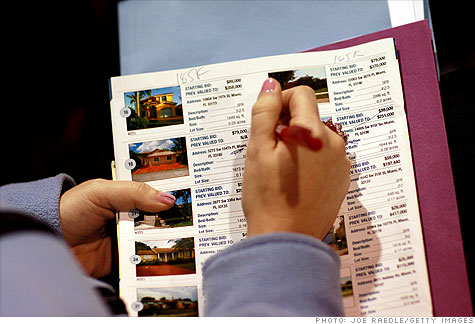 A woman takes notes on a pamphlet listing foreclosed homes being auctioned off in Miami on August 14, 2010. By Tami Luhby, senior writerNovember 1, 2010: 2:51 PM ET

The foreclosure crisis has entered a new phase, with at least three major banks halting foreclosure proceedings and sales in nearly two dozen states. One just expanded the ban on foreclosure sales across the nation.

The developments, however, have left homeowners with many questions. CNNMoney.com tries to cut through the confusion.

Why are major banks halting foreclosures?

Banks are temporarily freezing foreclosures while they review their handling of the process. Ally Financial, formerly known as GMAC, was the first to stop the clock, admitting that some of its foreclosure paperwork may not have been signed in the presence of a notary public and that the signer may not have fully reviewed the information in the documents.

JPMorgan Chase (JPM, Fortune 500) and Bank of America (BAC, Fortune 500) have since said they too are halting foreclosures while they review their paperwork and procedures.

How many loans are affected?

The exact number isn't known. Chase has said 56,000 loans are affected, but Bank of American and Ally have not provided a figure.

It's likely hundreds of thousands of foreclosures are now in limbo. And the number could grow if more banks join the freeze. Politicians and state Attorneys General are calling on financial institutions to widen the review.

There are currently 5 million loans that are seriously delinquent or are in the initial stages of foreclosure.

Why is this happening in some states and not others?

Ally, BofA and Chase have halted proceedings and sales in the 23 states where judges must sign off on foreclosures. The shoddy handling of paperwork came to light in court hearings, where bank officials testified that they had signed thousands of documents a month, often without reviewing the information in them.

The banks are now taking a time out to make sure the documents will pass muster before judges.

BofA announced Friday that it was halting all foreclosure sales across the nation. But it is not stopping the foreclosure process in the 27 states in which the courts are not involved.

Brian Moynihan, BofA's chief executive, said Friday the bank wants to "clear the air" and the review will take a few weeks.

Will the troubled borrowers get to keep their homes?

No, not in the vast majority of cases, experts said.

The bottom line is that the homeowners involved have stopped paying their loans. And while there may be some serious problems with the paperwork, the foreclosures are not illegal.

"It's a stretch to say someone has committed fraud by taking shortcuts in a foreclosure," said Guy Cecela, publisher of Inside Mortgage Finance, an industry newsletter. "At the end of the day, it doesn't change anything."

"Ultimately this can't change the fact you've defaulted on your mortgage and someday you will lose your house," he added. "All it will do is delay that day of reckoning."

The moratoriums could last until January since it will take a few weeks for servicers to review the paperwork and institutions often freeze foreclosures during the holiday season, he said.

I'm not in foreclosure. Will the freezes affect me?

In the short term, the lack of new foreclosed properties coming on the market could help the housing industry because there will be less competition for homes already on the market.

The freeze also means that abandoned houses will just sit on the market. So homeowners who have kept up with their payments will have to keep looking out the window at those boarded-up properties.

In the long run, the housing market cannot fully heal until the troubled loans work their way through the system. As long as a large number of homes remain in the foreclosure process, it will be difficult for prices to stabilize.