Embattled homeowner to bank: You don't own my loan 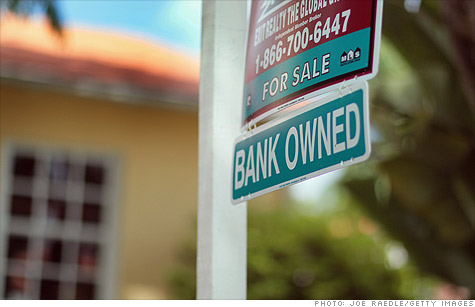 (CNN) -- Replique D'Amelio plays with her two children on their spacious lawn well aware the threat of foreclosure hangs like a cloud above the Wappingers Falls, New York home.

D'Amelio, though, is confident she's found a legal strategy that will not only keep her in place, but could also stop mortgage bankers in their tracks as they attempt to lay claim to properties of hundreds of thousands of Americans who are delinquent on mortgage payments.

D'Amelio and her attorney, Linda Tirelli, are taking aim at the way the mortgage industry prepares legal documents used against delinquent homeowners. They charge the electronic filing system that the mortgage industry devised to facilitate the selling of mortgages from one financial party to another results in documentation that is faulty and therefore not legally binding.

"These companies that are too big to fail apparently also think they're also too big to comply with the law of the land and it's beyond outrageous," charges Tirelli.

Tirelli maintains that CitiMortgage, the Citigroup (C, Fortune 500) unit that collected D'Amelio's monthly payments as the servicer of the loan, has no legal standing to pursue a claim against D'Amelio because the company does not own her loan. The owner is Fannie Mae, the taxpayer bailout-supported firm that invests in millions of mortgages. Yet Fannie Mae's name is nowhere to be found on the "Assignment of Mortgage" document CitiMortgage produced in the D'Amelio bankruptcy case. Instead, the document assigns the mortgage to CitiMortgage.

"This is an improper assignment of mortgage that's meant to shortcut the system," claims Tirelli. "It's less about the truth and more about how fast can we get this property foreclosed on."

D'Amelio is determined to defend her home. "Outside of my children and my family, there is nothing more important," she says.

On the surface, she appears to have a weak defense. D'Amelio is in default, even after CitiMortgage granted modifications of her loan; She is "underwater" on the home, owing nearly $390,000, more than the property's value; and CitiMortgage has sent her warnings, to which she declared personal bankruptcy to try to head off foreclosure.

For its part, CitiMortgage says it has followed normal procedure. "We believe this claim is without merit," said spokesperson Mark Rodgers. "Many investor/owners prefer that the servicer conduct all the collection activity in the name of the servicer, and this is one way of accommodating that process."

Fannie Mae points out this is how it operates with lenders all the time.

In fact, CitiMortgage owned D'Amelio's mortgage for only a couple of months in 2006. On the very day Replique D'Amelio took out her $369,000 mortgage, November 3, 2006, the original lender, Home Loan Center, an affiliate of Lending Tree, sold the loan to CitiMortgage.

Citi quickly packaged the mortgage into an investment and sold it to Fannie Mae on January 1, 2007. Yet the Assignment of Mortgage document stating CitiMortgage still owns D'Amelio's loan is dated June 24, 2010.

That information on the document comes from a Virginia company owned by CitiMortgage, Fannie Mae and other big mortgage players: MERS -- "Mortgage Electronic Registration Systems."

When banks sell mortgages to each other and eventually package them into investment securities they use MERS as an electronic repository to keep track of the owners. MERS says it has 64-million loans in its database; most likely your mortgage is one of them. If a bank wants to foreclose it simply turns to MERS for the necessary documentation, much faster and cheaper than retrieving local title records. But the MERS papers -- like those for Replique D'Amelio's home -- sometimes don't reflect the true status of the mortgage, say real estate law experts.

"We're seeing forgeries, we're seeing backdating, we're seeing postdating largely because lenders are scrambling to come up with a chain of title that MERS was ill-equipped from its inception to provide," contends Seton Hall Law Professor Paula A. Franzese.

She says the mortgage industry never received legislative authority to replace the traditional paper trail of local property records with an electronic data base. "We don't have that chain of title anymore. Hence lenders are now scrambling as they endeavor to foreclose on loans, to come up with the requisite paperwork."

Lawyers like Tirelli see an opening that may allow their clients to hold onto their homes if they can prove documents like the Assignment of Mortgage are not legally binding.

While MERS holds a long string of legal victories, it has suffered some defeats recently, including a case before the Kansas Supreme Court that described MERS' relationship to banks "akin to that of a straw man."

"They're working at the margin of the ability to foreclose," maintains Georgette Phillips, Professor of Real Estate at The University of Pennsylvania's Wharton School. "This entire debacle is a symptom of the Wild West, 'shoot first, ask questions later' attitude of the securitization industry that took hold of the mortgage process."

MERS says it "provides clarity, transparency and efficiency to the housing finance system." Indeed, CitiMortgage says it relies on the MERS data base to pursue clients who are delinquent on their mortgage payments.

But if lawyers for homeowners -- like Replique D'Amelio -- can successfully challenge MERS' procedures then the recent foreclosure suspensions could turn into a far broader freeze.