FORTUNE -- If we have learned anything from the failed energy policies of every president since Richard Nixon, it is this: Reducing America's heavy oil import dependence is easier said than done. However, if America truly wants to return to its full potential economic growth rate, we must significantly reduce that oil import dependence.

As a nation, we who constitute 4.5 percent of the world's population and possess less than 3 percent of proven world oil reserves consume almost 25 percent of annual world oil production. We also depend on foreign imports for 65 percent of our oil needs. This consumption amounts to over 20 million barrels of oil a day at a cost of almost $2 billion a day and more than $600 billion a year. 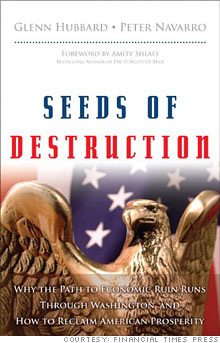 1) World oil prices are not set through the free-market forces of supply and demand, but rather by a cartel -- the Organization of Petroleum Exporting Countries (OPEC). To set prices, members of the OPEC cartel agree to reduce production artificially and thereby prop up the price to the desired monopoly level. In this way, they seek to extract maximum rents from buyers such as American consumers and businesses.

2) World oil demand -- spurred by rapid development in China, India, and other emerging markets -- is now rising at a rate faster than new oil reserves are being discovered. This growth means that oil prices are likely to be in a long-term uptrend. If nothing else changes, the pricing power of OPEC is only likely to increase.

3) America's existing proven oil reserves are being depleted rapidly. These reserves total a little over 20 billion barrels of oil. Although that sounds like a lot, at our current rate of production of around 8 million barrels a day, these proven reserves will be drawn down within eight years.

4) Most of the world's oil and natural gas are located in countries that historically have not shared our interests. Do we really want to trust our energy future to such nations as Iran, Russia, Libya, and Venezuela?

5) America's "addiction to oil" now acts as a chronic brake on economic growth by effectively imposing a burdensome tax. As oil prices rise, American consumers must pay more to fill their gas tanks. American businesses likewise face higher production and transportation costs. The result is a loss of purchasing power for consumers and a reduction in output and jobs for businesses -- and downward pressure on wages.

In attacking our oil import dependence problem, perhaps the greatest political obstacle is partisan gridlock. Many Democrats prefer to solve our energy problems using "soft path" options -- from energy conservation and regulatory fixes such as higher gas mileage standards to a greater reliance on renewables such as solar and wind. Many Republicans prefer "hard path" options ranging from drilling for more oil and developing more domestic natural gas to the increased use of coal and nuclear power.

In fact, Democrats and Republicans are both right in this critical sense: The truly "smart path" lies in embracing both hard- and soft-path options. Indeed, any Democrat who does not believe we should be drilling for more oil and developing nuclear power is as foolish as any Republican who scoffs at the need for economically sensible conservation and more renewables.

In fact, an important economic common denominator exists between the hard- and soft-path options that point to our proposed policy solution: As the price of oil rises, America's import dependence falls as both soft- and hard-path oil substitutes become more economically attractive."

This inverse relationship exists on the soft path side because higher oil prices cause more consumers to buy fuel-efficient cars, drive fewer miles, and retrofit their homes for energy conservation. Some businesses likewise undertake more energy conservation measures. Still others switch to alternative fuels such as domestic natural gas or more efficient generating options such as cogeneration.

Similarly, on the hard-path side, higher oil prices encourage domestic oil producers to increase their exploration and drilling activities. Difficult-to-extract oil reserves such as tar sands and shale become more feasible even as the rate of return on investments in solar and wind power likewise increase.

From these market dynamics, we may now glean a possible policy solution that should have bi-partisan appeal by its very nature -- a flexible oil fee. The best way to explain how our flexible oil fee would work is by example.

Suppose, we first determine that in order for the U.S. to cut its oil import dependence from, say, 65 percent to 50 percent the price of oil must be maintained above $100. At this targeted price floor, enough new hard- and soft-path energy supply and demand sources would be elicited by market forces over time to achieve the desired reduction in oil imports.

It is precisely this market-based flexibility and the removable nature of our proposed oil import substitute price floor fee that make it a more politically palatable solution than any permanent tax on either oil imports or gasoline -- neither of which has any broad political support among the general public. We also believe that any revenues raised from such a fee should be given back to the American people in the form of tax cuts -- thereby making the oil tax revenue-neutral.

In proposing this solution, we believe that Democrats can embrace it because it promotes energy conservation and the development of renewable. Its flexible nature of the fee likewise reduces concerns about the regressivity of such a fee and any transient negative impacts on the poor.

Republicans should likewise embrace such a proposal because it is market-driven, it is revenue-neutral, and it is applied only when the price of oil rises above the target. Moreover, this simple market-driven mechanism removes the need for any elaborate regulatory programs.

Perhaps most importantly, our approach solves one of the most vexing problems plaguing energy conservation and the development of renewable energy: the historical boom-and-bust cycle of oil prices. Here's the problem:

When oil prices are booming, consumers rush to buy fuel-efficient cars, and alternative-energy producers find it more and more economic to get solar and wind projects online. However, once oil prices go bust, the legs of these alternative-energy substitutes are cut out from beneath them. This boom-and-bust oil price cycle and its attendant volatility significantly raises the risk of investments in oil substitution technologies; and this higher risk is reflected in a higher cost of capital for these projects and a lower rate of development -- and therefore less oil substitution.

Our proposal for a flexible and removable oil price floor solves this problem by insuring market participants against the downside of periodic oil price busts. This insurance will lower the risk, and therefore the cost of capital investment, in such projects for all market participants.

Of course, we understand that the politics of any such proposed oil fee are difficult at best. After all, nobody likes a new fee or tax. However, in the context of America's oil import dependence, it is well worth considering a flexible, removable, and revenue-neutral price floor fee that both sides of the political aisle can embrace.

--Excerpt from "Seeds of Destruction - Why the Path to Economic Ruin Runs Through Washington, And How to Reclaim American Prosperity" (FT Press, 2010) by Glenn Hubbard and Peter Navarro.