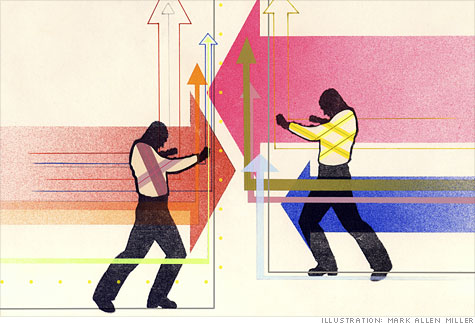 FORTUNE -- The checkbooks are poised. After many grim months in the wake of the financial crisis, 2010 has seen a resurgence of mergers and acquisitions. Of late, headlines have chronicled Dell and Hewlett-Packard in a bidding war for datastorage company 3Par, mining giant BHP Billiton embroiled in a contentious $40 billion campaign for Potash, and Sanofi-Aventis making its own hostile play for Genzyme. Meanwhile, marquee corporations such as IBM, GE, and Johnson & Johnson have all announced acquisitions.

"Everybody is looking for growth," says Andrew Lipsky, head of M&A in the Americas for Credit Suisse, and companies have cash to spend. The result: Mergers and acquisitions totaled more than $700 billion in the third quarter -- the busiest quarter in two years (though still well below precrisis highs), according to Dealogic. Barring economic calamity, Lipsky expects the M&A upswing to continue for three to five years.

That's good news for investors. If you can identify the next targets, you can make a nifty profit. Of course, the timing is tricky: Even the hint of an acquisition can send a stock soaring, reducing the possible gain. The key is to find companies that are quality investments in their own right -- so you're not burned if a deal doesn't develop -- that also offer the bonus of a potential takeover. With that in mind, we interviewed deal watchers and found targets in three of the sectors seeing the most action.

Companies like HP, Cisco, and Oracle are trolling for acquisitions again, and tech investor Kevin Landis thinks specialized outfits like VeriFone (PAY) will benefit. The San Jose-based company is leading the race in electronic payment terminals, which you can find in grocery stores, gas stations, and New York City taxicabs. Sales jumped 24%, to $261 million, in the latest quarter, and Landis believes growth will continue as VeriFone expands to Asia. "It's tough to say there's a Pepsi to this Coke," says Landis, a star fund manager during the Internet boom who now oversees $225 million in four mutual funds as chief investment officer of SiVest Group. With no strong competitor, Landis says, VeriFone could be attractive to NCR, IBM, or even HP, which sold off VeriFone in 2005.

Wireless is another area likely to see consolidation, says Mario Gabelli, who seeks takeover targets with the $25 billion he oversees for mutual funds and institutional investors. Last month, Russia's VimpelCom spent billions to buy mobile company Wind Italy and take a controlling stake in Cairo-based Orascom Telecom. Millicom (MICC) could also be snapped up, Gabelli says. The Luxembourg-based wireless company operates in 13 countries in Latin America and Africa, where less than a third of the population has a cellphone. As Millicom continues gaining share and its cash grows, Gabelli thinks it could become a target for companies like South Africa's MTN or France's Vivendi. Millicom's stock is up almost 40% in the past year, but its price-to-earnings ratio of 14 remains modest. Gabelli thinks the shares, now trading around $98, could bring $117 in a buyout.

Veteran analyst Dick Bove sees a looming wave of buyouts. Core earnings at the country's strongest banks aren't growing, and he thinks the banks will resort to acquisitions to boost their bottom lines. Fifth Third Bancorp (FITB, Fortune 500) is on his list of targets. The Cincinnati-based lender was a Wall Street darling in the '90s. But after management shakeups and an ill-timed Florida acquisition, it got hammered in the financial crisis.

Shares plummeted, and Fifth Third hasn't repaid its $3.4 billion in TARP aid. But with loan losses shrinking, Florida's real estate market stabilizing, and the stock trading below book value, Bove thinks shares can jump from $12 today to $19: "The company is starting to come out of all of its miseries and is ready to show some pretty sizable earnings increases. That's why it is a takeover target." Bove expects regulators to decide how much capital banks must hold by the end of November. After that, super-regional banks like PNC Financial, U.S. Bancorp, and BB&T are likely to go shopping. Fifth Third could be on their list.

Shares of Cabot Oil & Gas, once a favorite of investors playing natural gas's rise, have plunged as gas oversupply has cut prices to half their 2008 level. After peaking at $68 in 2008, Cabot (COG) shares trade around $30. But analysts predict buyouts in the next few years as larger companies hunt for reserves. Cabot could be a ripe target, says UBS analyst David Deckelbaum. The company has large reserves in two of the richest gas fields: Haynesville in Louisiana and Texas and Marcellus in Pennsylvania and West Virginia. Cabot's early entry into those regions allowed it to grab lower-cost leases, which has helped blunt the impact of the gas-price declines. Earnings fell 15%, to $21.7 million, in the latest quarter, compared with a 24% slide in natural gas prices. "Their acreage is attractive to a larger consolidator," says Deckelbaum. Suitors could include Southwestern, Ultra Petroleum, or Range Resources. Deckelbaum thinks shares could rise to $40 in the next year -- roughly what a buyer might be willing to pay.

Yahoo surges on report AOL wants to buy it