In Kokomo, former auto giant is acting like a startup 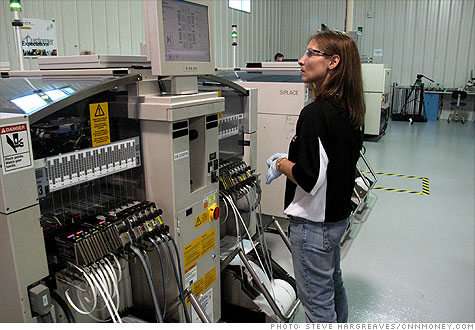 KOKOMO, Ind. (CNNMoney.com) -- Just a decade ago, Delphi Automotive was a giant of the auto industry. It had more than 200,000 employees and made electronics for General Motors, then the largest car company in the world.

Today, Delphi is a very different company. It has spun off from GM, survived bankruptcy and shed half of that workforce. Now it is trying to emerge from the ashes of the American auto industry as a nimble competitor in a fast-changing business.

Nowhere is the Michigan-based company's desire for change more evident than in Kokomo, Ind. (Photo gallery: The new Kokomo)

On the outskirts of town, Delphi has matched an $89 million grant from the U.S. Department of Energy to open a factory making circuit boards that control hybrid vehicles.

Hybrid technology is only a small part of Delphi's global business. The company still earns most of its money making electronics for internal combustion engines.

But at this plant, Delphi is hoping to enter the next generation of transportation as a next-generation kind of company: nimble and cost-conscious.

During a tour of the facility, senior managers talked about how they mow the grass and vacuum the carpets themselves. They even produced a picture of one of them on a riding mower.

"To keep costs down, this is what we're doing," said David Schulte, the plant's engineering manager. "We're like a startup."

The facility is producing the electronic circuit board described as the "brains" of a hybrid vehicle. It tells a hybrid's engine when to switch from battery to gas power, converts the volts from the battery to power the rest of the car can use and governs other electronic functions in the vehicle.

Inside the plant, it's as sterile as any electronics manufacturing facility. The workers wear gloves, comfortable looking T-shirts and jeans.

Delphi execs said the stimulus grant allowed them to keep 100 manufacturing jobs in Kokomo, as well as hire an additional hundred as production ramps up over the next five years.

People in Kokomo are excited about the plant and the employment prospects it offers.

But outside analysts say Delphi faces an uncertain future in the electric car businesses.

On the one hand, Delphi is smart to go after the electronics side of the business and not the battery side, said Jessie Pichel, head of clean energy research at the investment bank Jefferies & Co.

The battery business is cutthroat and requires expensive technology. And the batteries themselves are in danger of becoming just another commodity.

At least with electronics, there's proprietary information and the boards can be sold as a value-added product.

"The battery is the most commoditized part of the electric vehicle," said Pichel.

But Delphi's challenge in this space may be the space itself.

While managers at the plant are convinced electric cars are the future of transportation, other analysts aren't so sure.

"Ninety percent of cars in the next 10 years will run on gasoline," said Jacob Grose, an analyst Lux Research, consultants on emerging technologies. "It's not going be a home run or the kind of thing that can save a company."

While Delphi may be a top player in auto electronics in general and well positioned to supply hybrid parts, it's a good thing the firm is diversified in other aspects of auto manufacturing as well, Grose said.

As he notes, nine out of 10 startups fail.