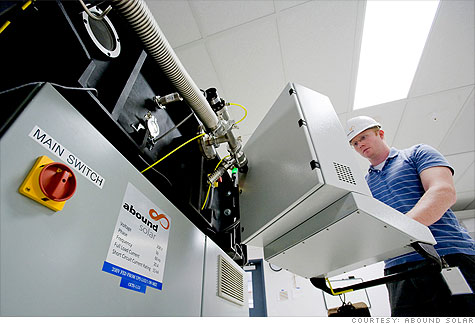 Abound Solar may put $300 million into former DaimlerChrysler facility, hiring 900 workers. Is it for real? By Steve Hargreaves, senior writerOctober 20, 2010: 10:35 AM ET

That may soon change.

Abound plans to put three quarters of that money into the Kokomo plant, hire as many as 900 people by early 2012 and start exporting to Germany.

It almost sounds too good to be true. Indeed, town officials in Kokomo -- striving to recover with a big infusion from the Obama administration's stimulus programs -- seem to hold Abound's plans with guarded enthusiasm.

"This is a key piece of our manufacturing strategy," said Mark Chen, Abound's director of marketing. "Our contracts with our customers require us to continue to grow."

Abound, a private equity-backed company, grew out of a project at Colorado State University.

The company chose the Kokomo area because it's close to the raw materials required for the panels, namely glass produced in cities like Toledo, Ohio, which also supplies windshields and windows for the auto industry, Chen said.

Like other companies that set up shop in the Midwest, Abound was also attracted by the skilled workforce, tax incentives and access to transportation to ship products.

"It's a straight shot up to the Great Lakes, on a boat, and it's out," Chen said.

But other companies are also in on this play.

One of them, First Solar, is big and has been producing such panels long before Abound came into existence.

Perhaps even more worrisome are two big boys entering the thin film market: One is Stion, which is 50% owned by Taiwan Semiconductor, one of the world's largest semiconductor companies. The other is Primstar Solar, which recently received big backing from General Electric.

"These companies have enormous amounts of cash, and are very good at making large amounts of components on a cheap basis," said Johanna Schmidtke, a senior analyst at the emerging technologies firm Lux Research.

That said, Schmidtke said she remains "hesitantly positive" on Abound.

Analysts said the federal grant to Abound is a good sign, and means the plant near Kokomo will more than likely be churning out products in the near future.

What's less certain is whether it will still be making things five years down the line.

Delphi: A former auto giant acting like a startup