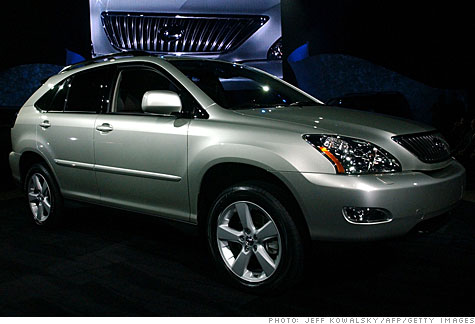 NEW YORK (CNNMoney.com) -- Toyota is recalling 740,000 vehicles sold in the United States because of potentially unsafe brakes, adding to the automaker's 2010 recall woes.

Separately, the U.S. division of Honda said it is planning to announce the recall of an undisclosed number of vehicles for the same problem.

Toyota said it's recalling the vehicles because a small amount of brake fluid could leak from the brake master cylinder, causing the brake warning lamp to go on.

If the problem is left untreated, Toyota said driver will first notice a spongy or soft brake pedal feel, and that the brakes' ability to slow the vehicle will gradually deteriorate.

Toyota said the problem stems from the use of non-Toyota brake fluid. Toyota-brand brake fluid contains lubricating polymers that prevent the problem, the company said.

The company said that Toyota and Lexus dealers will replace the brake master cylinder cup at no charge to vehicle owners.

Worldwide, Toyota is recalling 1.5 million vehicles because of the problem.

The recall will cover Acura RL and Honda Odyssey models from 2005, 2006 and 2007. Ra did not say how many vehicles will be recalled, but she did say the recall stems from problems similar to those behind the Toyota recall.

The new brake problem is the latest to affect Toyota, which has recalled millions of vehicles due to a variety of safety issues.

Since the second half of last year, Toyota has announced recalls of more than 8 million vehicles. The latest major recall was in August, affecting about 1.33 million Corolla and Matrix vehicles built from 2005 to 2008 and sold in the U.S. and Canada. The company said there was a risk of cracks forming at solder points or on electronic components used to protect circuits from excessive voltage.

NASCAR to use ethanol fuel mix