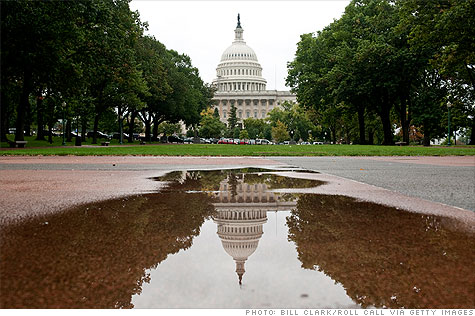 Tax experts say if lawmakers reduce the myriad tax breaks on the books it can be good for the deficit and good for taxpayers. By Jeanne Sahadi, senior writerOctober 26, 2010: 2:05 PM ET

NEW YORK (CNNMoney.com) -- Who says there's no bipartisanship? Democrats and Republicans running for Congress are finding every way possible to assure voters they will keep Americans' taxes low forever.

But those will be hard promises to keep after the economy recovers. Tax experts almost uniformly say the next Congress should rethink the more than 200 tax breaks in the federal code that cost more than $1 trillion a year. And, yes, that includes even the really, really popular ones.

Lawmakers may be presented with the idea as early as December, when President Obama's fiscal commission issues its report. There is a possibility the commission may recommend curtailing or eliminating some tax breaks.

Commission co-chairman Erskine Bowles has publicly expressed support for the idea. So has commission member Alice Rivlin, former White House budget director. Another member, Republican Sen. Judd Gregg, who coauthored a bipartisan plan for tax reform, supports curtailing some breaks but only to lower marginal tax rates in the context of broader reform.

The $1 trillion-plus in forgone revenue is close to the amount allocated for defense and discretionary spending in 2010, or the equivalent of nearly a third of the latest federal budget.

Cutting back on tax breaks can be a more efficient way to bring in revenue than raising income tax rates because it would subject more work and business income to taxation. If done right, it also promises to make the tax code fairer and simpler.

For years, leading tax experts and economists from the left and the right have contended that tax breaks are, in reality, a form of spending. The cost of tax breaks is mostly invisible, since there's no formal accounting of them on Uncle Sam's books. And once passed into law, they are rarely scrutinized.

"[Tax breaks] are styled as tax savings, but really function as replacements for explicit government spending. Some make sense, but a great many are poorly targeted and would never pass Congress if presented as an outright spending proposal," tax expert Edward Kleinbard wrote in an article this summer called, "Sacred Cows: It's Them or Us."

A disproportionate amount of the lost revenue from tax breaks comes from just five of them.

Not surprisingly, those five are also among the most popular:

Many of those breaks are only available to the roughly one-third of taxpayers who itemize deductions on their returns.

There have been a number of proposals over the years for how the biggest breaks might be modified.

Most recently, the bipartisan Committee for a Responsible Federal Budget put out a paper highlighting many possibilities that combined could raise $1.7 trillion in additional revenue over a decade.

For instance, consider the money that workers receive when their employers contribute to their health insurance costs. That subsidy is currently treated as tax-free income to the worker and is unlimited.

The subsidy could instead be converted to a credit, which is a dollar-for-dollar reduction of one's tax bill. The credit would be phased out for higher income taxpayers and it would be refundable for low-income workers who don't make enough income to owe any federal income tax.

"This strategy would reduce the incentive for employers to offer 'gold-plated' insurance plans," the budget watchdog group wrote.

The mortgage interest deduction -- currently available on up to $1.1 million of borrowing -- could be gradually reduced so that it only applies to loans on up to $500,000. And the option tax filers get to deduct interest on their second homes could be eliminated.

"[Today's] policy is regressive (providing larger tax breaks to those well off enough to purchase more expensive homes), promotes homeownership over other productive investments and costs the government roughly $100 billion a year in lost revenues," the committee noted in its paper.

Since everyone in Congress can identify and vilify what they see as "tax breaks for special interests," curbing tax breaks has a lot of bipartisan support. The problem, of course, is that there's less agreement on just which tax breaks deserve the ax or at least a haircut.

And, of course, since politicians much prefer to hand out tax breaks to voters and financial backers, it may be hard for them to muster the mettle required to reverse gears.

How hard? Bowles put it plainly at the fiscal commission's public meeting in September.

Tax reform plan could reduce tax bite for many