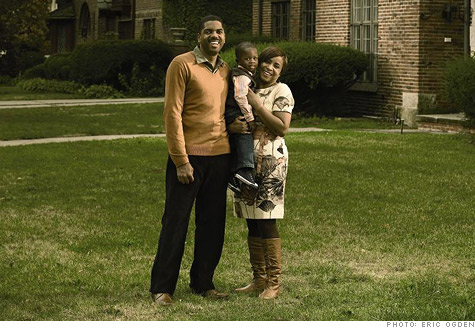 The Macks are getting ready to buy their third property in Detroit. Click here for the risks other couples are taking. By George Mannes, senior editorOctober 28, 2010: 12:32 PM ET

DETROIT (MONEY Magazine) -- Richard and Pamela Mack are making a big bet on the future of Detroit: They've just purchased a huge house in a city that's been hollowed out by the Great Recession and the near death of the American auto industry.

One in 10 homes here stands vacant, according to Data Driven Detroit, and unemployment in the metro area is at a staggering 15%, reports the Bureau of Labor Statistics. Some would say it's crazy to buy property in this city right now, but a good value investment always looks like a bad idea to most people. That's what makes it a value.

For the past year MONEY and its sister Time Inc. magazines have chronicled how Detroiters, such as the Macks, are coping with what's happened in and around their hometown.

You may have encountered similar, if less daunting, challengs in the recession and so-called recovery, or you may well indeed down the line. The smart, realistic strategies laid out here can help you get going when your personal economy gets tough.

The Macks buy a house

The real estate crash has been tough on the Macks. Their condo overlooking the Detroit River -- where Pamela lived before they married -- was appraised at $80,000 in 2003. Now the apartment, which they're renting out, is worth closer to $25,000, based on asking prices for other units in the building.

The decline in their property values is hardly unusual for the city. What is surprising is the fact that the Macks bought another house. Over the past year, the two attorneys, who have a 2-year-old son, have made offers on 17 properties.

Their plan: Move in, rent out their University District home along with the condo, and in 20 years have a real estate nest egg for retirement. "I get to support the city that I love and be a part of a very good investment," says Richard. "It's win-win."

Have a margin of safety. The Macks' investment entails plenty of risks. Although their house looks like a bargain, there's no guarantee that real estate prices will rebound -- or that they won't fall further.

So when does a "deep value" investment make sense? Take the counsel of famed investor Benjamin Graham and be sure there's a margin of safety, or a comfortable gap between the price you're paying and what you conservatively think it's worth. Which leads to ...

Think income, not capital gains. Most of us think of real estate as a capital-appreciation investment -- meaning that the return comes from a rise in the property's value. But income from rent can cushion the margin of safety, and many advisers think it's more profitable to view real estate as an income investment anyway, since values aren't expected to balloon anytime soon.

At current prices, in a nice Detroit neighborhood, you can get more in rent than your carrying costs, says realtor Christine Winans of Prudential HWWB in Birmingham, Mich. That improves the cushion for the Macks, even if they plan to live in the house. (They can always rent it out if they move again.) A real estate agent can help you figure out whether the prospects are as good in your area.

Be prepared for care and feeding. As a real estate investor, be ready to put in sweat equity. That means fielding calls at 2 a.m. complaining about a burst pipe, or paying a property manager to handle such issues for you. And because a bad tenant could cost you thousands in rent, damage, and legal fees, you'll need to do due diligence upfront -- including background checks, credit checks, even a Facebook check, advises Shuki Haiminis, president of real estate brokerage Lofts.com.

Lessons from Detroit: Start a business