Lessons from Detroit: Take a risk and start a business 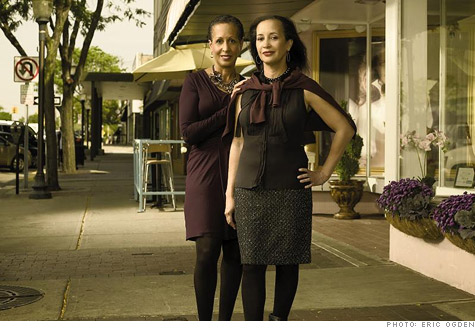 Paula Batchelor (right) and her sister, Karen, are taking a risk on a startup. Click here for the changes others are taking. By George Mannes, senior editorOctober 28, 2010: 12:29 PM ET

DETROIT (MONEY Magazine) -- When Paula Batchelor took a buyout last year -- figuring she was likely to be laid off if she didn't -- she wasn't worried about landing another gig. Having worked 11 years as a graphic-design project manager for a health insurance company downtown, "I knew I had skills," she says.

But Batchelor, a single mother of a 6-year-old, quickly realized just what it meant to live in one of the worst job markets in the country. By year's end, the resident of Royal Oak -- a suburb north of the city -- still had no work and couldn't make her mortgage payment. "I was feeling the pressure," says Batchelor, who's now 55.

For the past year MONEY and its sister Time Inc. magazines have chronicled how Detroiters, such as Batchelor, are coping with what's happened in and around their hometown.

You may have encountered similar, if less daunting, challengs in teh recession and so-called recovery, or you may well indeed down teh line. The smart, realistic strategies laid out here can help you get going when your personal economy gets tough.

In June, Batchelor's older sister, Karen, an attorney who'd gone into life coaching, had a proposal. She'd used social media, including Facebook, to market her own biz; Paula had skills in project management and graphic design. Why not combine their talents and help small businesses with social-media marketing?

The firm they founded, Color Me Social, had $1,500 in sales in August, a promising, if modest, start. While the money isn't coming in fast enough for Paula to save her home from foreclosure -- she and her daughter are moving in with Karen -- Paula is hopeful that this is the beginning of her turnaround.

"You have to stick your neck out and take a chance," she says.

Beware the first idea. Startup activity in 2009 was at its highest level since the late '90s -- no doubt because so many people were untethered from regular jobs.

But novice entrepreneurs face fierce odds: Only half of new businesses survive five years, reports the Small Business Administration. And companies begun by unemployed people, who are scrambling for a quick idea, have dimmer prospects.

Whether you're looking for a sideline or a full-time business, know that "the ideas you can easily come up with are the most likely to fail," warns Scott Shane, author of The Illusions of Entrepreneurship. That's because entrepreneurs often start with what they want to do, rather than what people want to buy, he says.

The Batchelor sisters were unusual in that their idea came out of a market need: Karen was inspired after having been bombarded with questions from friends who wanted to use social media in their businesses but didn't know how.

Leverage what you know. "Experience is the most important asset you have to have," says Mel Ettenson, a counselor at the Detroit chapter of SCORE, a volunteer organization that assists small businesses.

Between Karen's experience marketing her coaching business and Paula's work in project management, the Batchelors think they have the right skills. But if your idea is not in an area in which you have expertise, moonlight in the field or take a class that will introduce you to it.

Focus on process as much as product. Many would-be entrepreneurs get caught up in fantasies of their product or service, says Ettenson.

"But to convert a dream into a profitable business, you must have a plan," he says.

In other words, even if you bake the world's greatest pastries, you won't be able to make a viable business of it if you haven't figured out how to manufacture, deliver, and sell them.

Mindful of this, Paula and her sister thought early on about what back-office systems they'd need to efficiently handle product management, billing, and other essential tasks.

Lessons from Detroit: Buy a house