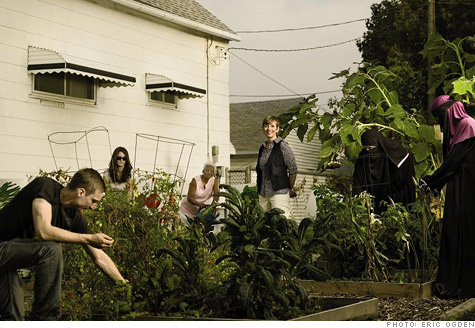 DETROIT (MONEY Magazine) -- Barbara Stachowski, who worked on land development projects for an engineering firm, was making photocopies at work one day in 2006 when her supervisor asked, "Hey, you got a second?" By the time they got to the conference room, Stachowski knew what was coming: With business having slowed down, she was being laid off.

"It was scary but exhilarating," recalls Stachowski, now 53. She'd been contemplating a career change for years, and this was her chance.

For the past year MONEY and its sister Time Inc. magazines have chronicled how Detroiters, such as Stachowski, are coping with what's happened in and around their hometown.

You may have encountered similar, if less daunting, challenges in the recession and so-called recovery, or you may well indeed down the line. The smart, realistic strategies laid out here can help you get going when your personal economy gets tough.

In 2007 Stachowski entered a master's program in social justice at Detroit's Marygrove College. And today she has a job she loves: a contract position directing Weed & Seed, a crime-prevention and community-revitalization program in Hamtramck, a small city that's surrounded by Detroit.

It hasn't been easy. She's taken a 25% pay cut and is paying for her own health insurance, all while shouldering $25,000 in student debt. "But reinventing yourself takes time," she acknowledges. And already people are starting to recognize that she's good at what she does. "Just today I got two calls for possible consulting jobs," she says.

Give yourself time. Stachowski is right about how hard it is to change professions; it rarely takes less than three years, says Herminia Ibarra, a professor at the Insead international graduate business school.

That's because you need to figure out what you're looking for -- a trial-and-error process for most people -- and then gain relevant experience and make connections. So if you're thinking you could use a backstop career, start moving on it, whether by moonlighting or taking a night course, before the layoff comes.

Focus your retraining. Going back to school can be a good tool for jump-starting a career change, but you'll need to do a cost-benefit analysis. In your forties and up, you don't have as much career left to earn back your tuition expenses.

Besides, a general degree, like an MBA, probably won't buy you much -- most of the benefit comes not from what you learn but from the implication that you've met a certain standard, says New York City career coach Stanley Back.

Since a long résumé can serve the same purpose, it is more cost-efficient to take a few courses that would sharpen specific skills you know you need for the transition -- or go for a highly focused degree, as Stachowski did.

Play up your transferable skills. You may not need to acquire more training if you can convince hiring managers that you're a shoo-in. That comes down to your sell. "You have to position yourself relative to what you want to do in the future, not what you've done in the past," says Ibarra.

So if you're a marketing specialist trying to get a job as a project manager, talk about how you've completed projects on a tight deadline rather than sharing details about campaigns you've led.

Lessons from Detroit: Cut your losses

Lessons from Detroit: Start a business