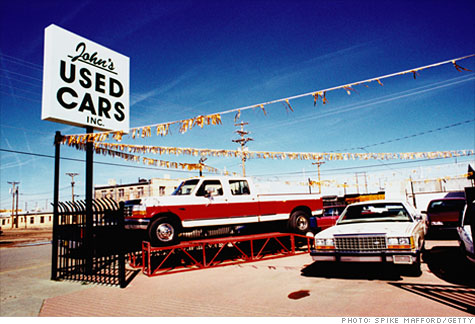 FORTUNE -- New or used? Burdened by a weak economy, U.S. carbuyers are choosing the latter option more and more, helping to drive used-car prices to a record high while holding back new-vehicle sales that are sputtering at roughly two-thirds of the pre-recession level.

Economists have a word for it: Substitution.

According to Karl Brauer, an analyst for automotive website Edmunds.com, those preferring used cars over new fall into two categories: buyers who are forced to economize and others who can afford new but decide to hold off because ``there's a bit of a stigma to spending."

Or, as Tom Webb, chief economist for Manheim Auto Auctions, put it: "It's cool to be frugal."

The average price of a used vehicle sold through October reached $18,570, compared to $17,968, a year earlier, said Edmunds.com. Edmunds, a website for shoppers, measures views of web pages devoted to new vehicles and compares with views of pages dedicated to used.

As prices of used vehicles increase, the difference between new and used should narrow, attracting some buyers of used to switch to new. But lately manufacturers have squeezed new-vehicle discounts, causing new prices to rise as well. Thus, vehicle affordability may be difficult in both categories.

"There are fewer used vehicles available because manufacturers are selling less to fleets and therefore have fewer to recycle back to the market," said Deirdre Borrego, a vice president at J.D. Power & Associates. Almost 700,000 vehicles junked under the U.S. government's "cash for clunkers" subsidy program to stimulate new-car sales also cut into the supply of used vehicles.

Improvements in design, materials and manufacturing mean that today's vehicles can be operated safely longer than ever, albeit at the cost of continuous maintenance and repair. Borrego said that the average miles on a car traded in this year was 49,148 miles compared to about 46,000 miles last year. Average age of all cars on the road peaked last year at about seven years.

Analysts study new-versus-used ownership trends carefully for signs when new-car buyers might be returning to the market, an important indicator of how strongly the economy is rebounding. In the early part of the last decade, sales were running between 16 million and 17 million vehicles annually. This year sales are on track to finish at fewer than 12 million.

Dana Johnson, chief economist for Comerica Inc., said he expects vehicle sales of 13.3 million next year. "Interest rates remain low, and cars are pretty affordable, though not as much as they were" during the recession.

J.D. Power predicting sales of 12.9 million new vehicles next year, Borrego said. The biggest group of returning buyers, she said, are between the ages of 16 and 35 with lower credit scores "who were shut out of the market" when the U.S. economy was at its weakest.

The recent impressive profit reports from General Motors Corp. and Ford Motor Co. (F, Fortune 500) are a sign that strong pricing might be more critical to financial health than large unit sales.

Does Ford have a Cadillac strategy for Lincoln?

Car advice: Who do buyers trust most?
Subscribe to Fortune