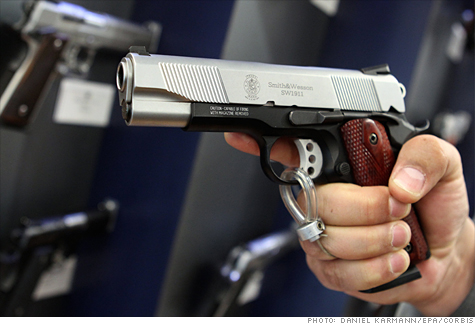 FORTUNE -- Smith & Wesson should be shooting like an ace. So why is it firing blanks? It's a question certain to be on the minds of shareholders who have watched the price of just about every other Armageddon trade skyrocket in value since the Western powers began trying to print their way to prosperity.

While investors flocking to precious metals, agricultural commodities, farmland and even Smith & Wesson's competitors have been richly rewarded, those who stuck with America's storied gun manufacturer have lost a bundle.

Over the last twelve months, the SPDR Gold Trust (GLD) has risen more than 21%, the IShares Silver Trust (SLV) is up more than 48%, the PowerShares DB Agriculture Fund (DBA) is up almost 13%, and Sturm, Ruger & Company (RGR), Smith & Wesson's publicly-traded competitor, has gained a respectable 37%. Prices for US farmland are rising so fast the FDIC is talking about a bubble.

In contrast, those who took on Smith & Wesson (SWHC) have lost almost 20% of their funds in the past year. Not even a vote of confidence by Carl Icahn -- whose investment company purchased almost a 4% stake earlier this year -- was able to stop the pain. One big reason is that Smith & Wesson's problems haven't all hitched to the whims of a cruel economy; besides the usual operational difficulties, the company has spent the last year dealing with a bit of legal Armageddon all its own.

As he told CNBC that September, the demand for firearms had "significantly changed since the election" of Barack Obama, adding that "as unemployment rises and the economy gets tough, the consumers are buying firearms for personal protection." He said 27% of all S&W customers in the first six months of 2009 were first time gun buyers compared with only 9% in 2008. He noted that pistols were selling briskly, while tactical rifles had also been "a hot category."

However, after topping out at around $7.27 a share that May, Smith & Wesson's stock price began to recede almost as fast as Ben Bernanke's popularity. Part of the problem may have been the stock just got ahead of itself and that America's legion of hand-wringers had bought up all the ammo they expected to need for the rough times ahead. But the stock price wasn't helped by a steady drumbeat of insider selling, and the company's operations weren't all hitting the target either.

In March, the company missed sales estimates. Smith & Wesson's CFO, William Spengler said firearms sales were reaching "more stable levels of demand and production" following the Obama spike. But investors weren't biting. Instead they sent the shares down to $4.32, a painful 9%.

It was around here that a few big investors began sifting through shrapnel. Shares popped in June when a landmark US Supreme Court ruling struck down a Chicago handgun ban and severely dented efforts by other cities to rein in handgun ownership. Then the company reported better earnings and guidance; Carl Icahn disclosed that he'd snapped up almost a $10 million stake (One he is rumored to have just unloaded.); and a few analysts felt comfortable again recommending the shares.

After the earlier shellacking his company received, CEO Michael Golden couldn't help but crow a little on his June 30th conference call, noting that "fiscal 2010 was simply a very good year."

There was "very high consumer demand for firearms" said Goldman. The company's efforts to diversify into more military, law enforcement and international markets, including its 2009 acquisition of Universal Safety Response, a perimeter security company, were also bearing fruit. "[W]e have recently generated significant proposals on large government opportunities," he noted.

But operational traction and a relatively cheap price haven't stopped the stock from getting cheaper still. Since that June 30th call, Smith & Wesson's shares have traded down more than 7%, while the Russell 2000 has gained more than 16% and Sturm Ruger has gained nearly 5%. Smith & Wesson commands a lower PE and almost half the price to sales ratio that Ruger has.

The problem hobbling the company that allowed James Bond his signature silhouette, and outfitted Dirty Harry with "the most powerful handgun in the world" is that it faces at least one large uncertainty Ruger doesn't have.

In January, a Smith & Wesson sales executive was swept up in a massive FBI undercover investigation of bribery in the small arms industry and charged with violations of the Foreign Corrupt Practices Act. The sales executive allegedly attempted to bribe the representative of an African country that was taking bids for a $15 million deal to outfit that country's presidential guard. The representative was an undercover FBI agent.

FCPA investigations have become a growth industry for the legal community, particularly those in the business of suing companies for shareholders; after filing a handful of lawsuits per year at the beginning of the decade, the Department of Justice now has about 240 such investigations underway. Win, lose or draw, they are expensive cases to sort out. In its earnings release this September, Smith & Wesson reported the investigation had already cost it a few million dollars and was hampering "international shipments" of its handguns.

Worse for shareholders is that nobody knows how expensive Smith & Wesson's case will eventually become. Responding to analyst questions following the earnings release, CEO Golden said he couldn't give any guidance on whether it would keep costing a few million bucks a quarter. And the company's financials don't paint a rosy picture were other shoes to drop.

A Smith & Wesson spokeswoman did not return requests for comment. But, while the company says it is cooperating fully with DOJ investigators and has not been charged with any violations, company filings note that this remains a possibility. "If the DOJ determines that we violated FCPA laws, or if our employee is convicted of FCPA violations, we may face sanctions, including significant civil and criminal penalties. In addition, we could be prevented from bidding on domestic military and government contracts and could risk debarment by the U.S. Department of State," Smith & Wesson wrote in its most recent quarterly financial statement.

That would be pretty bad news for any company, but particularly one now pinning hopes on "large government opportunities."