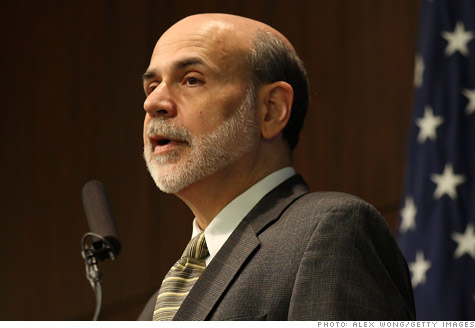 Nations need to work together to correct global imbalances as the world economy recovers at an uneven pace, the Fed chairman said at a banking conference in Frankfurt, Germany.

While praising the global coordination that helped pull the world's economies back from the brink of collapse, Bernanke said the sense of common purpose that resulted has "waned" and that tensions among nations have "intensified."

Bernanke's principal complaint is that officials in emerging markets have prevented the appreciation of their currencies to the detriment of developed economies -- the same argument employed by Obama administration officials in recent weeks in criticisms of China.

"The strategy of currency undervaluation has demonstrated important drawbacks, both for the world system and for the countries using that strategy," Bernanke said.

Bernanke also defended the Fed's decision earlier this month to pump $600 billion into the financial system by purchasing U.S. Treasuries. Central bank officials from many U.S. trading partners, including Germany, have criticized the plan for potentially dangerous side effects.

Bernanke acknowledged the rancor, but argued that additional stimulus is necessary given persistently high levels of unemployment in the United States, particularly among those who have been out of work for long periods of time.

"In taking that action, the Committee seeks to support the economic recovery, promote a faster pace of job creation, and reduce the risk of a further decline in inflation that would prove damaging to the recovery," he said.

Bernanke stressed that the Fed has the tools to drain money from the economy if necessary. He also noted that the Fed purchased Treasuries and other assets "on a large scale" during the financial crisis, which he said "appears to have been quite successful in helping to stabilize the economy and support the recovery during that period."

Bernanke argued that the Fed's action is rooted in conventional monetary policy.

"Even the asset purchases, the quantitative easing, done by the British, the Americans, the Japanese has some pretty classic roots to it," he said during the question and answer portion of the conference.

Some developing nations have blasted the United States for labeling China a currency manipulator, while also pursuing a policy that effectively undermines the value of the dollar. In response, Bernanke said the dollar's recent decline was a reflection of its safe-haven appeal in the currency markets, adding that fostering economic growth will eventually restore the currency's strength.

Bernanke also acknowledged criticism from officials in developing countries such as Brazil, who worry that the extra liquidity being pumped into the system will inflate asset bubbles in emerging markets.

He noted that there has been a recent increase in capital inflows to such nations but suggested that it was due more to differences in currency exchange rates, particularly among nations that devalue their currencies.

To that end, Bernanke also discussed the challenges created by the "two-speed nature" of the global economic recovery, in which emerging markets are growing much faster than established ones.

The "bifurcated" recovery is making it difficult to coordinate economic policies, he said, and is fueling tensions between nations that have large deficits and those that are running surpluses.

While world leaders were united by a common cause during the global financial crisis, Bernanke warned "that sense of common purpose has waned" as the world economy has recovered at an uneven pace.

"Tensions among nations over economic policies have emerged and intensified, potentially threatening our ability to find global solutions to global problems," he noted.

QE2: 3 signs to watch for progress