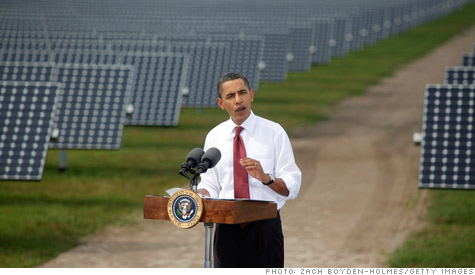 President Obama gave billions of dollars in cash to the renewable energy industry, helping it to grow. Now, the game may be up. By Steve Hargreaves, senior writerNovember 19, 2010: 2:09 PM ET

NEW YORK (CNNMoney.com) -- After years of rapid growth and darling status among many in Washington, the future of the American renewable energy industry is uncertain.

That's because the government cash it has come to rely on may dry up on Dec. 31.

Before the Great Recession, renewable energy developments were helped by a tax credit, worth generally 30% of the cost of the project. When the recession hit, the stimulus package replaced those tax credits with direct cash grants of similar value. Cash is considered more beneficial than credit to the industry.

So far, the government has handed out about $5.4 billion, according to the Energy Department.

Congress could vote to extend the grants, but that's highly unlikely.

If they're allowed to expire, incentives for renewable energy will revert to the old tax credits.

"This is not a great place to be in," said Denise Bode, head of the American Wind Energy Association. "It's an economic opportunity that will be missed."

The wind industry is already hurting -- even with the cash.

Fewer wind farms are being built this year compared to last. The amount of new electricity wind can generate declined 72% in the third quarter compared to the same time last year, according to the wind association.

The wind industry isn't the only one saying it will suffer.

Without the cash grant, "we'll grow at a much smaller rate," said Edward Fenster, CEO of Sunrun, a San Francisco-based company that installs solar panels on people's homes.

"They've ensured that we're building something new everyday," he said

Sunrun has 7,000 customers in seven states. The company installs $1.1 million worth of new systems every day, employing 3,000 contractors.

Fenster said the cash grants let him get cheaper loans than the old tax credits, enabling him to reduce the price of the solar energy he sells by up to 25%. He predicts that price reduction would allow him to double his business next year.

But with "cut spending" the mantra on Capitol Hill, slower growth may be the new reality.

"On a gut level, a lot of the conservatives just don't like to see the government handing out checks to people," said Kevin Shaw, an energy lawyer at Mayer Brown. "I just don't see the grant program being extended."

But the White House does. The Obama administration has proposed a plan: Pay for it by using money left over from the stimulus package. That's led some analysts to at least give it a shot at passing.

"You have a road map from the White House," said Whitney Stanco, an energy analyst at the Washington Research Group. "And previously, Republicans have been amenable to using unspent stimulus funds to pay for other priorities."

A spokesman for presumed Speaker of the House John Boehner wouldn't get into details about what the incoming house might fund.

He did say that Republicans support all forms of energy development, including renewables and nuclear power, provided that any money for them comes from expanded domestic oil and gas drilling, a prospect that looks dim.

There's another piece of legislation that could provide support for the renewable industry besides the cash grant -- a mandate that would require utilities to buy a certain percent of their power from renewable energy.

About 30 states already have such a mandate, and the industry has been pushing hard for a federal standard of at least 15%.

But most analysts say that while a broader "clean energy" standard that includes nuclear and natural gas may have a slightly better chance of passing, neither idea will gain traction in the next year.

Even absent the cash grants or the requirement to buy renewable power, some analysts say the sector is not doomed.

Michael Hennessy, a wind analyst at Bloomberg New Energy Finance, is predicting wind turbines will add about 8 gigawatts of power in 2011.

The country has about 1,100 gigawatts installed from all sources, with wind accounting for the vast majority of what people consider renewable energy.

"It doesn't bode horribly in our view," Hennessy said of the cash grants expiring. It's just not as good as it could be.