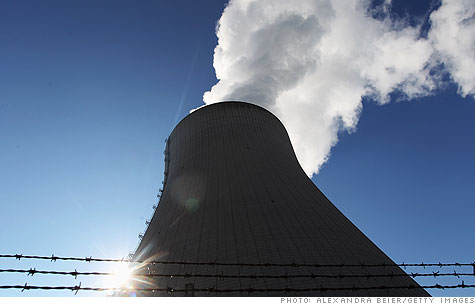 Plans to build more nuclear power plants are running up against a hard reality: No one wants to pay for them. By Steve Hargreaves, senior writer November 11, 2010: 10:41 AM ET

NEW YORK (CNNMoney.com) -- Nuclear power may be one issue both President Obama and the new Republican Congress can agree on, but unless someone is willing to pony up more money, a big new build-out of nuclear power plants remains unlikely.

Obama has been pushing nuclear power in a big way since taking office.

The president's 2011 budget -- still not passed by Congress -- calls for $36 billion in government loan guarantees to build new nuke plants. That's in addition to the $18.5 billion already approved for loan guarantees as part of the 2008 budget.

In a speech after last week's electoral drubbing, Obama highlighted nuclear energy as one area where the two parties might find common ground.

"There's been discussion about how we can restart our nuclear industry as a means of reducing our dependence on foreign oil and reducing greenhouse gases," the president said in a new conference. "Is that an area where we can move forward?"

And Republicans are on board as well.

A spokesman for John Boehner said the likely Speaker of the House, like most Republicans, supports building more nuke plants.

The problem is, of course, money.

Currently the U.S. derives about 50% of its electricity from coal. Nuclear and natural gas make up about another 20% each. Renewables account for about 10%, the vast majority of that coming from hydroelectric dams. That energy mix isn't expected to change much in the coming decades.

Boehner's spokesman pointed to the Republican's long-standing energy platform, where money for all sorts of new energy developments comes from expanded domestic oil and gas production.

Yet expanded oil and gas production seems unlikely, especially in light of this summer's BP disaster. Indeed, not a single new deep water drilling permit has been issued since the Gulf explosion.

For his part, Obama planned on paying for the new nuclear plants and other energy developments with money raised from restrictions on greenhouse gas emissions, known as a cap-and trade plan. But with the economy in stall mode, Republicans in the House and voters in no mood for new taxes, that plan is dead.

"Money is just hard to come by for anything right now," said Joseph Stanislaw, an independent energy adviser at Deloitte & Touche.

Not everyone is so pessimistic.

Nuclear power may see more funding if Congress and the administration can find a way to sell the plan for what it is really is: Loan guarantees, not outright grants.

In a loan guarantee, the government agrees to pay the loan in case of default, but doesn't actually put up any money otherwise. Therefore, what's needed is simply authorization to spend $36 billion, or whatever number is finally decided on.

Plus, whatever company takes out a loan must pay the government a premium for backing it.

"I think Congress will look again at the loan guarantee program," said Whitney Stanco, an energy analyst at the Washington Research Group.

Stanco also noted that the government could encourage more nuclear plants not only with loan guarantees, but with a clean electricity standard that requires utilities to buy more power from sources that don't emit as much carbon dioxide, like nuclear.

"In general, more republicans in Congress means more nuclear," she said. "The question is what policies might they put in place to make that happen?"