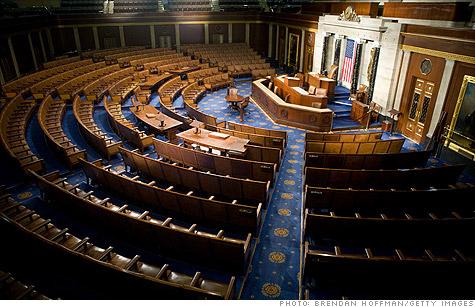 FORTUNE -- Twenty years ago last month, a new breed of Republicans was asserting itself in Congress. President George H.W. Bush thought he had bipartisan support for a budget deal to tackle the deficit through steep spending cuts and some tax increases.

But when the package came to a vote in the House, an upstart firebrand named Newt Gingrich led a revolt of Republicans opposed to the tax hikes. The mutiny sank the bill. And though Bush later got his balanced-budget measure passed, his popularity took a severe hit, contributing to his reelection loss two years later.

Gingrich, meanwhile, was ascendant, leading a conservative revival that in 1994 won Republicans control of the House for the first time in a half-century and installed him as Speaker.

Fast-forward to today, and Ohio Republican John Boehner, a Gingrich acolyte, is poised to become Speaker just in time for another deficit debate to begin. His party rode to power by tapping boiling popular angst about federal spending. But don't look for either party to get serious about the issue this time around.

Their leadership has learned well the lesson of that earlier episode: deficit reduction requires painful tradeoffs and bipartisan compromise, and while the long-term economic benefit may be significant, the short-term political dividend is negligible at best.

In the wake of historic midterm elections that sent shockwaves through the political establishment and reordered the governing agenda, Fortune.com is exploring what the new balance of power in Washington will mean for bread-and-butter issues facing taxpayers.

This column -- on the prospects for real progress shrinking the deficit -- marks the first in a series tackling the debates that will define the coming year. We'll tell you what the flashpoints are likely to be and handicap the outcome. Check this space once a week or so for updates.

Campaign voices silenced on the Hill

We're starting with the deficit because concern over the growth of government was such an animating force in the elections. But even after voters delivered an unmistakable plea for fiscal discipline, policymakers are sending mixed signals about whether they're ready to heed the call.

Erskine Bowles and Alan Simpson, the Democratic and Republican co-chairs of the Presidential commission tasked with finding a comprehensive fix, recently tried to apply electro-shock to the moribund national conversation around the issue.

On Nov. 10, they released their own plan for bringing the government's expenses in line with its revenue. It would simplify the tax code by creating a single corporate tax rate and three personal income brackets. And it would lower them across the board by ending popular write-offs like the mortgage-interest deduction and the exemption for employer-provided health care coverage.

The adjustments would end up boosting tax receipts. And for every dollar they raise, Bowles and Simpson propose $2 worth of spending cuts.

To come up with those savings, they happily slice into the defense budget and Social Security benefits, among other sacred cows. Their aim isn't an earnest attempt at singlehandedly solving our looming actuarial crisis. It's more of a Hail Mary to salvage something from the commission, which looks unlikely to muster the needed support among its own members by Dec. 1, when its recommendations are due. Without that supermajority -- the support of 14 out of 18 commissioners -- Congress can simply ignore their work.

Deficit hawks have expressed optimism after the plan's release that it would at least refocus the conversation on the need to act and the hard choices at hand. And there have been signs that others on the panel are willing to talk turkey.

But congressional Republicans, who should be the most motivated to carry this forward, have instead been fiddling with an earmark ban addressed at less than half a percent of federal spending and pressing an extension of Bush tax cuts for top earners that would add $700 billion to the deficit. And members of both parties, responding to interest groups facing haircuts, have taken shots at the proposal. Newly reconfirmed House Democratic leader Nancy Pelosi, for example, calls it "simply unacceptable."

Not an encouraging start. There's a reason why pundits have been predicting gridlock next year, and it's not just because the elections are ushering in a divided government. They are also delivering a more polarized Congress, with fewer moderates in either party to help build bipartisan coalitions. In that regard, the rise of the Tea Party is a mixed blessing. The movement's focus on spending helped galvanize public interest in the broader debate.

But doctrinaire candidates who won on promises to tilt against the system are going to be less inclined to work within it to strike deals. Raising taxes, for example -- a key component of any serious effort to rein in the problem -- will likely remain anathema to scores of incoming conservative freshmen with movement backing.

Congress-watchers are rightfully skeptical. Norm Ornstein, a resident scholar at the American Enterprise Institute, dismisses the possibility of a holistic approach. "So the question becomes, 'Will we see any movement in Congress to take this up piecemeal?' And the answer, I think, is, 'No,'" he says. "There has to be a crisis, and the public demand for doing something about this is not enough."

That doesn't have to be the case. President Obama could take up the cause and try to force both sides to the table. David Walker, founder and CEO of the Comeback America Initiative, a new group focused on promoting specific fiscal fixes, acknowledges presidential leadership is the "only way we're going to make progress between now and 2012. He has to use the bully pulpit and make the case to the American people that doing nothing is simply not an option."

Obama has largely avoided the issue so far. But deficit hawks are looking forward to next year, when they hope he'll use his State of the Union address and budget submission to advocate his own plan.

A vote on raising the debt limit in the spring could also force the issue if conservatives demand that it comes with austerity measures as a price of their support. But don't hold your breath, says Scott Lilly, a senior fellow at the liberal Center for American Progress. Pointing to that 20-year-old budget deal, he noted that the type of Republicans who supported it are long gone.

"It grew out of exactly the same kind of bipartisan pre-baked agreement that's being considered here," he says. In today's GOP, "it's genetically encoded that they won't buy into any of this."