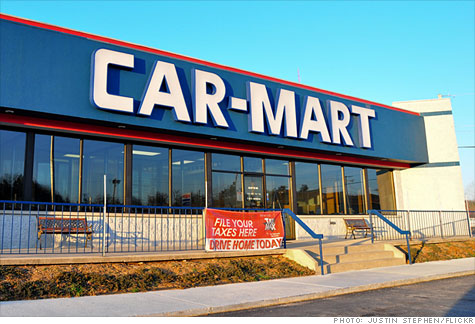 FORTUNE -- There is a tiny slice of the car business that targets the least credit-worthy customers and tries to get them into cars they can afford and pay for: "Buy Here, Pay Here" used car dealers. Recently they unexpectedly made the news when it was disclosed that Todd Combs, the man whom Warren Buffett hired to help manage his portfolio, is an investor in one of the industry's biggest players.

The timing is appropriate because if ever a demand existed for Buy Here, Pay Here, or BHPH, it is now. With unemployment high and millions of homes being foreclosed, many people who need transportation find they can't buy any because they have neither cash nor credit. BHPH serves buyers who have few alternatives and are willing to endure steep interest charges -- along with onerous collection tactics if they fall behind.

BHPH has more to do with lending and collecting money than it does with the traditional car business. The vehicle is merely a commodity, the asset used to secure the loan. One writer described a BHPH outlet as "a bank masquerading as a used car lot."

In the usual sales process, the discussion about how the car will be paid for comes after it has been selected. At a BHPH dealership, the process is reversed. The dealer first determines a buyer's credit history and figures how much he can come up with for the down payment and subsequent monthly payments; only then does he locate an appropriate vehicle.

The cost for this kind of credit is steep -- as much as 20% annually -- and the consequences of missing payments can be abrupt. Some services recommend that dealers install tracking devices so that they can locate vehicles whose owners haven't kept up and stop them from moving until payments resume.

Woe be to those who can't keep up. Although some BHPH dealerships will accept payment by phone or online, many require that the buyer physically bring a check or cash to their locations either monthly or bi-weekly. Some dealers are known to repossess vehicles if the payment is more than a day late.

"Collections is the focus of our business -- selling cars is not," America's Car-Mart CEO Tilman J. Falgout III said in a 2002 interview. That kind of single-minded focus has helped make his company popular with investors, among them Buffett's Combs.

The company would not comment for this story and referred us to its filings with the Securities and Exchange Commission for further information.

America's Car-Mart (CRMT), which is not to be confused with its Bentonville, Ark.-neighbor Wal-Mart (WMT, Fortune 500), operates dealerships in eight states, and calls itself the largest publicly held car retailer focused exclusively on BHPH.

Car-Mart got started in 1981, when the company's first used-car dealership opened in Rogers, Ark. Its strategy from the beginning was to sell to customers with limited or poor credit. It was an immediate success.

The company targeted communities in rural areas with populations between 20,000 and 50,000. It figured that the absence of mass transit made car ownership more critical in those communities, and the small population made those who missed payments easier to track down.

To make things easier on buyers, Car-Mart advertises that it will trade cars for anything of value -- from electronics to household appliances and farm animals -- but mostly it deals with cash.

A snapshot of Car-Mart's 2009 fiscal year gives a glimpse of a highly-profitable business. Before this year's run-up in used car prices, Car-Mart was paying between $3,000 and $6,000 for its cars. The most popular models were between three and 10 years old and with 90,000 to 130,000 miles on the odometer. They carried names from Detroit's graveyard of discontinued models: Pontiacs and Oldsmobiles, Ford Escorts, and Chevrolet Cavaliers.

But the cars were only a small part of the business model. "Collecting customer accounts is perhaps the single most important aspect of operating a buy here/pay here used car business and is a focal point for store level and corporate office personnel on a daily basis," the company says. "Substantially all incentive compensation is tied directly or indirectly to collection results."

It is not a process geared to people who have a tough time with deadlines. According to the company, credit losses as a percentage of sales has averaged 22%, and a company history posted on http://www.fundinguniverse.com/ puts the estimated repossession rate at approximately 18%. It is a tough business but a thriving one.

One disclosure you won't find in its financial statements is how many of those customers paid for their vehicles with livestock -- and whether the animals can be used for monthly payments as well. Chances are if that turns out to be a viable business in a depressed economy, some canny operator will find a way to take advantage of that too.

Car advice: Who do buyers trust most?