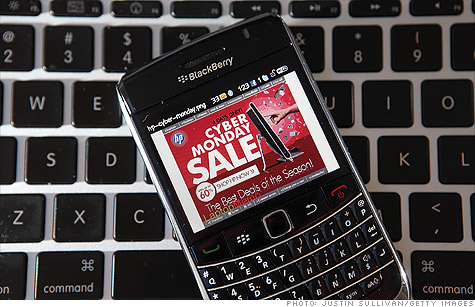 "Cyber Monday came in as the biggest shopping day of the year so far," said John Squire, chief strategy officer of Coremetrics, a unit of IBM Corp. (IBM, Fortune 500)

Cyber Monday online sales in the U.S. were up 19.4% in 2010 compared to last year, reported Coremetrics.

More people were shopping online and the individual orders were larger than last year. Coremetrics said the average order value on Cyber Monday was $194.89, an increase of 8.3% from last year's average of $180.03.

Shoppers also used mobile devices to make their purchases, with nearly 4% of all Cyber Monday shoppers using smartphones and other devices.

Google (GOOG, Fortune 500)'s online blog reported that consumers increased their online shopping activity this holiday season and are more savvy in how they approach their shopping experiences.

The blog said that 52% of U.S. smartphone users plan to use their phone to compare prices during the holiday season and 40% plan to read product reviews on their phones.